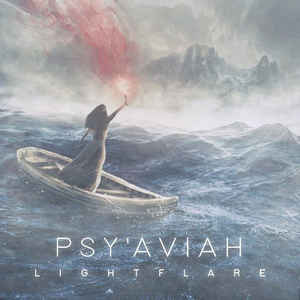 Background/Info: The sixth official studio album by Belgian Yves Schelpe aka Psy’Aviah appears to be a               very particular work for the artist. The writing of “Lightflare” helped him to exorcise personal demons, which are commonly known as ‘depression’ and ‘burn-out’. Just like on previous releases Schelpe joined hands with an army of female- and male singers.

Content: The singers who have contributed to this new work are Mari Kattman, Ellia Bisker, Marieke Lightband, Addie Nicole, MiXe1, Lofthill, Fallon Nieves, David Chamberlin, Phoebe Stone, Kyoko Baertsoen and Koner. The sound of Psy’Aviah has progressively evolved from underground electronics in the early beginning to electro-pop & dance eclecticism during the recent albums. It becomes rapidly clear that Yves Schelpe is more and more exploring the dance-pop style. Most of the singers are very talented artists that inject a sensual touch to the work while others bring a darker touch to the work.

+ + + : Diversity remains one of the main characteristics of this new work. It can be heard in the songs and of course the different vocalists. Yves Schelpe has a real nose to find the right singer for each of his songs. Sound-wise this album is the most ‘commercial’ one or should I say the most ‘dance-pop’ like. It sometimes reminds me a bit of Delerium, but my favorite cuts remain the darkest ones. The song “Reboot Reset Relay” sounds more in the continuation of earlier Psy’Aviah stuff reminding me the albums with singer Emélie Nicolaï. The sound production is absolutely impressive, which more than ever makes me say that Yves Schelpe is ready to switch from a mainly underground scene towards a more indie and commercial scene.

– – – : “Lightflare” is a technically overwhelming album coming from an artist who has lost ground with this scene. Psy’Aviah always has been a kind of antidote to dark-electronics, but he now become a true ‘alien’.

Conclusion: Yves Schelpe can be seen as a visionary artist of this scene; a kind of producer working with guest singers and exploring the most dance-like fields of electro-pop music. The question is if he still belongs to this scene? I’m rather skeptical about the answer however he released a cool work.