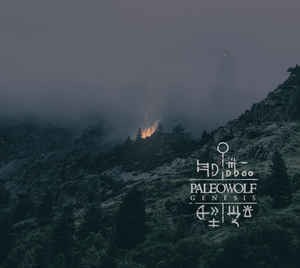 Background/Info: Paleowolf is one of the newest signings on Cryo Chamber although it concerns an artist who’s already familiar with the Swedish label. Serbian musician Scorpio V already released two albums under the Metatron Omega moniker. Paleowolf is another sonic brainchild of the artist, which released two albums during 2016. The first one “Promordial” was released on Echoes Of Koliba Productions while “Genesis” is the successor.

The concept of Paleowolf is ‘invoking the ancient spirits of prehistoric past. The era of Paleowolf is set in times before, during and after the Ice Ages, when humans were still living the lives of hunter-gatherers’.

Content: The ritual influence of the work is one of the most noticeable elements. It is a bit comparable to Metatron Omega although this project is more diversified and maybe a little less tormenting. You’ll notice deep, humming sound waves mixed with field recordings like aquatic sounds and carried by a slow, droning cadence.

The ritual element has been accentuated by different elements like deep-throated vibes of singing monks. It creates a mystic sound universe, which will rapidly lead you throughout an imaginary universe of mystery and angst.

+ + + : Scorpio V is one of the upcoming talents when it comes to ritual music. Paleowolf is more diversified than Metatron Omega and maybe less intimate, but it remains an overwhelming production in the genre. The songs have been patiently constructed and progressively recovered with extra sound layers where the magic of flutes, the slow cadence of drones and some typical mystic elements get dark-ambient lovers in a state of adoration.

– – – : You better avoid all comparisons with Metatron Omega. Both bands deal with similar influences, but the sound is somewhat different. I get the impression that Paleowolf comes to exorcise some ideas that couldn’t find their place in the Metatron Omega sound formula. That’s why it sounds more diversified and a little less poignant.

Conclusion: Join the occult rites of the ancestors, which have been reactivated by the magic of Paleowolf. This is a fascinating voyage throughout the most hidden corners of our mind.