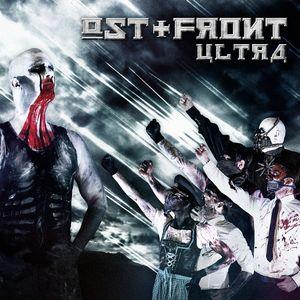 Background/Info: Ost+Front revealed themselves as one of the most promising German ‘industrial-metal’ bands composing in the shadow of Rammstein. After two successful debut albums and a few EP’s the band is back on track unleashing its 3rd opus, which is available as a double album and a limited box format for their biggest fans.

Content: “Ultra” has been announced as the most versatile full length to date so I was really wondering how it would sound-like. I don’t really notice a different source of inspiration while their mix of solid guitar and electronics remain pretty similar. The vocals are in their Mother tongue while most of the arrangements remain pretty epic-minded. Ost+Front remains a bombastic and exciting formation and is one of the most talented of the Rammstein pupils.

It’s not because they’re singing in German and are composing a similar sound that I always have compared Ost+Front with Rammstein. Several songs reveal explicit winks to Rammstein. “Fick Dich” is just one example, which immediately remind to “Bück Dich”, but the song properly speaking is quite comparable as well.

And what about “Afrika”, which sounds like inspired by “Amerika”.
But the least I can say is that this new ‘emulation’ of Rammstein still sounds hard, sexy, funny and great. One of the funniest cuts is “Fiesta De Sexo” featuring Hocico front man Erk Aicrag.

The extra disc reveals 6 more songs. We here get 3 extra tracks plus 3 alternative versions. The new songs are much more than B-side tracks while the mixes reveal an extra orchestral and cinematographic format.

↑↑↑: Despite of the constant comparison with Rammstein, Ost+Front remains one of the best copiers and most talented bands from the German industrial-metal scene. The new work again reveals excellent and powerful songs carried by impressive guitar riffs and great electronic treatments.

↓↓↓ : The originality is always far away when listening to Ost+Front.

Conclusion: This is not their best album to date although “Ultra” remains a well-crafted and fully accomplished piece of industrial-metal music.