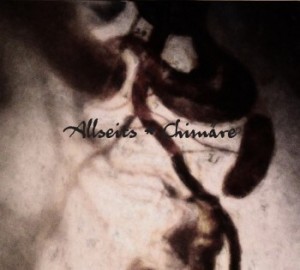 Background/Info: Nina Kernicke is one of the few female artists active in the wider fields of dark-ambient music. Allseits is not exactly what I would consider a leading project in the genre although the “Hel”-album gained some positive reactions. Six years have passed so this new opus is a bit like rediscovering the chilling universe of this band.

The universe of Allseits is totally tormented although some parts are more in between reverie and nightmare. The global atmosphere remains however hostile and extremely dark.

↑↑↑: The work has a great and irresistible visual strength leading the visitor to explore desolation. The work is extremely elaborate with a magic fusion between ambient layers and heavy drones while the guitar creates a kind of unreal sound dimension.

↓↓↓ : Except for only one track, which is not a real noticeable cut, this album comes pretty close to perfection.

Conclusion: “Chimäre” is a compact and poignant work with a great progression. This is an absolute masterpiece and definitely belonging to the highest level of dark-ambient music.