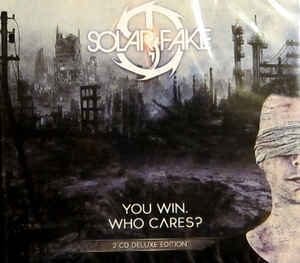 Background/Info: After the acoustic-live album “Sedated” (2017) Sven Friedrich and
André Feller are back on track unleashing the fifth studio album of their Solar Fake project.

Content: “You Win. Who Cares?” moves on there where previous albums left off. The influences remain pretty similar, mixing elements of EBM together with electro-pop and future-pop. The songs are danceable and mostly carried by solid melody lines during the choruses. A few harder cuts make me think to the power-pop style several artists are actually dealing with (and I especially refer to the newest work of Croona).

The limited edition of this work features an extra disc taking off with the cover of “Papillon” (originally written by The Editors). We next get a solid load of remixes by MR. Kitty, Patenbrigade: Wolff, Ost+Front, In Strict Confidence, Adam Is A Girl, Random Starlight and Era Nocturna together with Heavenly Creatures.

+ + + : Solar Fake has established their very own sound throughout the years. They are merging different electro-styles together resulting in a highly danceable and melodic pop format. This album confirms the talent of the German duo while accentuating their composing skills for great melody lines. But it also is an album revealing a styled approach and numerous cool sound treatments.

The cover version of “Papillon” is a real challenge, but it’s a cool version, which I think will be very efficient on stage. Among the remixes I especially want to mention the great job done by Patenbrigade: Wolff, In Strict Confidence and Adam Is A Girl.

– – – : This work will not take you by surprise; it sounds personal and danceable, but without being a  true innovation.

Conclusion: Solar Fake confirms their growing status (especially in their homeland) by this ultra accessible and danceable work.

Best songs: “Just Like This”, “Wrong Direction”, “Invisible”, “A Bullet Left For You” + “Just Like this – Patenbrigade: Wolff Remix”.