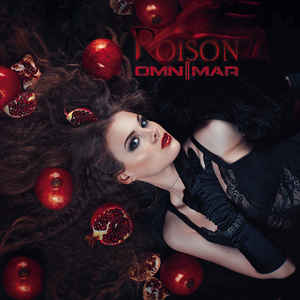 Content: Omnimar is not a band jumping on a fashion train. The new work simply brings influences together, which are mainly into ‘pop’, but now carried with rock-metal influences and then mixed with technoid elements. The work sounds a bit like a big challenge, but in the end it all sounds harmonious while carried by great choruses and some clubby cuts. They also get back to their debut album “Start” (2015) and the song “Sadizm”, which has been sung in English.

+ + + : I have to admit I wasn’t that familiar with Omnimar, but I guess the band couldn’t really catch my attention. “Poison” left me breathless and I instantly liked it. From groovy sequences to rock-metal passages and multiple alluring electronic treatments this album becomes a kind of ‘naughty-pop’ music. It sounds like a futuristic pop music dominated by raw electronics, muscled guitar riffs and the passion of their singer Maria Mar. The songs are diversified, accomplished and revealing a few potential hits.

– – – : I can imagine “Poison” is not an album that will ravish die-hard freaks stucked in one explicit music genre. Omnimar remains a challenge, trying to bring numerous influences together. I personally like it!

Conclusion: Omnimar clearly sounds like a big ‘f*** you’ to established standards! “Poison” resulted from numerous sources of inspiration that have been simply put together creating a great and original release.