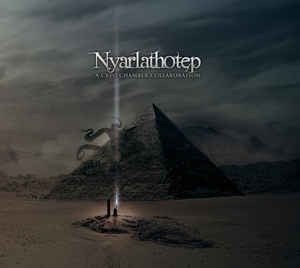 Background/Info: Cryo Chamber definitely appears to be under the influence of H.P. Lovecraft. The label already released the “Cthulhu”-collaboration featuring several label artists working together and achieving a great opus.

“Nyarlathotep” is a new collaboration between an impressive number of label formations. The story is about ‘A season of political and social upheaval. Mankind felt as if the world was at a breaking point, but no one wanted to speak of this. Seasons grew hotter. Our faith in the known gods faltered. The timing was ripe for the arrival of Nyarlathotep.’

Content: “Nyarlathotep 1” takes us away for a voyage throughout industrial metal sounds rapidly joined by dark, buzzing noise waves. The sound reveals heavy vibrations and the magic of an Eastern-like flute. We progressively join an imaginary world of obscure reverie, like entering a tenebrous universe featuring spooky voices. It also sounds like a misty sound universe made of disturbing passages accentuated by impressive sonic blasts.

“Nyarlathotep 2” definitely sounds more into the soundscape format. It’s not as heavy, but more into a dense and constant chilling atmosphere. It quite progressively evolves towards harder passages like echoing thunder in the background.

The final chapter and album “Nyarlathotep 3” takes off with a kind of signals from an imaginary, distant planet. It’s pretty astral-minded while reinforced by great sweeps and new buzzing sound waves. It moves towards a crescendo until reaching an absolute climax while the final part sounds pretty oppressive and tormenting, somewhat reminding to the early work of Lustmord.

+ + + : The realization of this work is absolutely amazing and rather unique. This is the kind of concept that wouldn’t have been possible without an artist taking the responsibility to create an interaction between all contributors. Simon Heath has been probably the one that made this enormous project come true. You don’t really have the impression of listening to a mishmash created by numerous artists. The work is pretty compact and homogenous featuring a great 1st and 3rd disc.

– – – : The release stands for more than 3 hours of sound and music so you really have to take your time listening to this work in the right circumstances. I wanted to discover the work without interruption, which took me several takes.

Conclusion: “Nyarlathotep” is a great conceptual release based upon an original idea, but it also reveals the ‘family’ approach of Cryo Chamber to unite all bands under the same wings.

Since you’re here … … we have a small favour to ask. More people are reading Side-Line Magazine than ever but advertising revenues across the media are falling fast. And unlike many news organisations, we haven’t put up a paywall – we want to keep our journalism as open as we can. So you can see why we need to ask for your help. Side-Line’s independent journalism takes a lot of time, money and hard work to produce. But we do it because we want to push the artists we like and who are equally fighting to survive. If everyone who reads our reporting, who likes it, helps fund it, our future would be much more secure. For as little as 5 US$, you can support Side-Line Magazine – and it only takes a minute. Thank you. The donations are safely powered by Paypal.
Tags: Alphaxone, Collier-Ford, Cryobiosis, Darkrad, Gydja, Kammarheit, Mystified, Neizvestija, Northumbria, Nyarlathotep, protoU, Randal, SiJ, Sjellos, Svartsinn, Ugasanie, Wordclock