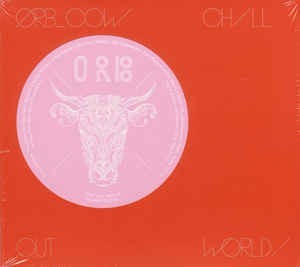 Background/Info: The Orb are an English electronic music group known for being the pioneers of  ambient (house). They even scored a hit with “Fluffy Clouds” in the early nineties. Alex Paterson and Thomas Fehlmann have become known for their genre-bending curiosity and surprising sonic detours, exploring experimental soundscapes as well as club-friendly beats. In contrast to their previous album “Moonbuilding 2703 AD”, which took a few years to produce, a more spontaneous approach was chosen to ‘simply make an ambient album’ within 6 months.

Content: “COW”, being the acronym of “Chill Out World” could ring a bell. Does it refer to a former Pink Floyd cover, is it a nod to the iconic “Chill Out” album from the KLF or is it a megalomaniac invitation to relax? For sure THE ORB’s trademark ‘playfulness’ is on full display. Each track title is a conceptual work in its own right, playing with multiple references, some of which remain highly personal and mysterious.

+ + + : The strength of the album can be found in the witty, ornamental surprises in the majority of the tracks. “Wireless MK2” for example holds mysterious sub bass chords blending perfectly with airy trumpets. Also “9 Elms Over River Eno (Channel 9)” holds interesting sources: material collected at North Carolina’s Moogfest, second-hand records from local stores, field recordings, live samples from gigs and an excursion to “The Eno River”.

– – – : A few tracks, lasting less than 3 minutes, could be considered less refined impulses to the more elaborate tunes.

Conclusion: This 10-track album is definitely a profound, refreshing and soothing ambient experience. Whereas the previous Orb albums referred more to Thomas Fehlmann’s solo work, this album can be interpretated as a combination of the good old Orb time tunes and the 2016’s vibe. The question now: has it enough potential to become an ambient standard?