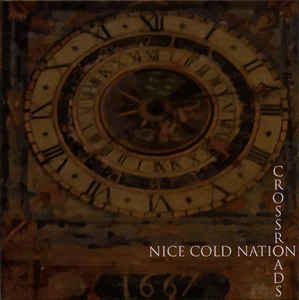 Background/Info: French formation Nice Cold Nation strikes back after two previously released albums. The albums “Sunless” and “Collapse” didn’t really impress me so I was wondering how this new work would sound like.

Content: The band remains pretty faithful to the somber and totally 80s devoted inspiration reminding the glorious days of new-wave. This is the kind of band that might appeal for fans of The Cure and Cocteau Twins.

+ + + : The least I can say is that “Crossroads” sounds as the most accomplished work of this band today. Especially the guitar parts are pretty accomplished and featuring all the sorrow this music reflects. The synth lines inject an extra moody flavor. A similar feeling of pain can be heard in the vocals. “Somewhere” is a cool song expressing all the dark feelings inhibited by Nice Cold Nation.

– – – : Nice Cold Nation clearly sounds on the right way, but maybe has to bring more sound-identity to their songs. The tracks are pretty similar to each other.

Conclusion: This is the kind of moody, melancholic music reminding me of the atmosphere in Autumn. The days are getting shorter and rainy, the leaves are falling from the trees… it all looks grey and this is the way how “Crossroads” sounds.