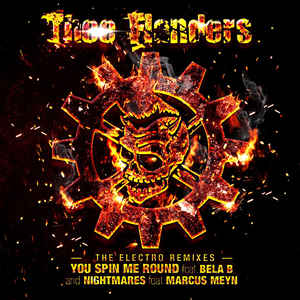 Background/Info: Thee Flanders is a German psychobilly formation, which has already released several albums throughout the years. They sometimes seem to cover famous songs. This album features 20 remixes by an impressive list of mainly electro-underground formations.

Content: The main songs of this release are “You Spin Me Round” from Dead Or Alive and “Nightmares” from A Flock Of Seagulls. Both 80s new-wave hits have been covered by Thee Flanders, sung together with Bela B (Die Ärzte) and Markus Meyn (Camouflage) and remixes by Leather strip, Die Krupps, Blind Passenger, Robert Görl, Ad:Key, Beborn Beton, Scheuber feat. G. Thomas, Patenbrigade: Wolff, In Strict Confidence, Absurd Minds, Mirko Hirsch, Head-Less, White Trash Wankers, T.A.N.K., Sound Tessellated, Beyond Obsession, Tomas Tulpe, Modekay, Keller Technik and The Klaak Syndrome.

The result is a very diversified release, which mainly sounds electro-like, but moving from darker-electro remixes to EBM to electro-minimal, but also electro-punk, new-wave and somewhat metal-orientated work. Notice by the way that White Trash Wankers is the only band that remixed another song (cf. “Buried Alive”).

+ + + : This album definitely sounds like a challenge, but especially for the fans of the band who I can imagine aren’t used at all to hearing their favorite band remixed by electronic formations. It’s not only a challenge, but I like this originality and it could be fun to hear one of those famous electro-acts featured on the album getting remixed by psychobilly bands. Why not? But the main point is that especially the remixes of “You Spin Me Round” feature a few outstanding versions. I want to make a special mention for the originality and minimalism of Patenbrigade: Wolff, the groovy approach of Head-Less, the harder version of Die Krupps and into EBM transposed remix of AD:Key. Another noticeable remix is “Nightmares” from Leather Strip.

– – – : There are a few less inspired remixes featured, but that’s rather understandable when you get a total amount of 20 remixes. But the main point remains for sure the reaction of the Thee Flanders fans about this totally weird challenge.

Conclusion: Is it just for fun or a psychobilly formation that has found a way to enter electro clubs? Whatever it is, this work is DJ food and be sure you are going to dance to it!