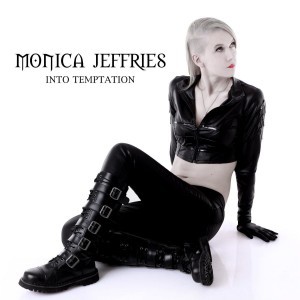 Background/Info: Monica Jeffries is a Polish born artist who has already released a few EP’s. You may have seen her on stage as she did the support of some wellknown artists playing at famous festivals. “Into Temptation” reveals ‘older’ songs from the EP work that have been featured in a different mix plus new songs as well.

Content: “Into Temptation” reveals a fusion between different influences. It’s hard to speak about an established music genre rather than evoking elements of electronics, rock, new-wave and a few melodic pop elements. The songs moving from heavy passages carried by solid guitar riffs to more electronic cuts accomplished with some fine crystalline sound effects and icy sequences.

Some of the cuts move on the edge of power-pop music. One of the most surprising cut is a cover version of “Surrender No Resistance”, which was originally written by Absolute Body Control.

+ + + : I like the diversity of this album, which is moving in between different styles revealing a cool balance between electronics and guitar. The heaviest cuts definitely are the best ones while I also prefer the more electro-driven songs instead of the electro-rock driven ones.

– – – : The main point that hurts is the production of the vocals, which is missing some passion on most of the songs. I however have to say that a song like “Waiting For Godot” reveals a more passionate and appropriated way of singing.

Conclusion: “Into Temptation” is a rather versatile opus revealing cool passages, but missing a real climax.

Since you’re here … … we have a small favour to ask. More people are reading Side-Line Magazine than ever but advertising revenues across the media are falling fast. And unlike many news organisations, we haven’t put up a paywall – we want to keep our journalism as open as we can. So you can see why we need to ask for your help. Side-Line’s independent journalism takes a lot of time, money and hard work to produce. But we do it because we want to push the artists we like and who are equally fighting to survive. If everyone who reads our reporting, who likes it, helps fund it, our future would be much more secure. For as little as 5 US$, you can support Side-Line Magazine – and it only takes a minute. Thank you. The donations are safely powered by Paypal.
Tags: Monica Jeffries