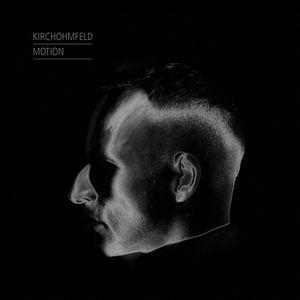 Background/Info: Kirchohmfeld is a German band that was originally set up as a duo featuring Andreas Neumann and Gerhard Eminger. Neumann became the single member on board. “Motion” is the 4th (mini)-album of the band and the first one in 9 years. Kirchohmfeld is a band releasing new work in an irregular timeframe.

Content: I honestly can’t remember to have heard of this band before, but I can already tell you this album incited me to discover their earlier work.  Kirchohmfeld is a fascinating electro project dealing with vintage electronics. “Motion” is an appropriated title giving me the impression of going back in time to awaken somewhere in the late 80s. The songs sound pretty electro-wave minded while driven by a slow rhythm. The main difference with the earlier work is the more extreme minimalism running through the songs.

The songs reflect a minimal feeling, which has been accomplished by a high-tech production process. Andreas Neumann likes to manipulate his sounds to get an icy, original sound. Both opening cuts are beautiful and surprising while “Nachtfahrt” sounds a bit more rhythmic and danceable tones.

The songs have been sung in German, which reminds me this typical German scene that saw the daylight in the late 80s and, which became quite famius during the 90s.

+ + + : “Motion” reveals a well-crafted electro-minimalism with a typical German touch on top. This is pure vintage electronic music.

– – – : The last two songs can’t totally convince me and it’s a pity this work only features 5 songs.

Conclusion: The German electro scene still has a few ‘secret’ bands, which aren’t that renowned and yet reveal a huge potential. Let’s now hope that Kirchohmfeld will become a little bit more prolific.