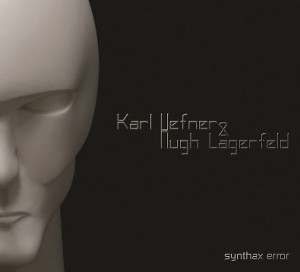 Opener “Redhead Sky” throws you right back in the ’80’s and is followed by “Syquest”, a song built up, layer by layer, going from an ambient-like intro towards a full danceable electro-pop song in the style of Goose. “Der Nachtmann” reminded me on “Housewife” of Daan and is a song which could have been part of the repertoire of Vitalic while “Terror Rice” sounds very atmospheric and ‘spacy’, starting from an Antiloop-wise intro.

“Buchstabieren” is for me by far the best (danceable) track and has the potential to become a club-hit and dancefloor-filler! I also recognized the sound of Vitalic in “City Loneliness”, a song where even guitars are used to create the climax.

Another highlight is “Bunkerkopf”, a downtempo song which creates a very dark gloomy atmosphere. Track 8, “Floorlayer” reminded me of Tiga and is for sure very club-minded as well.

“Kontrolieren” I found the least-interesting song while the synths on “Untkalker” (what’s in a name!) also threw me back to the ’80’s. The last piece “Gamebreaker” has a huge new-beat content and is a worthy closing-track of this 57 minute duration album, of which each song has an average playing-time of approximately 5 minutes.
If I have to say one minor point about the music it is that sometimes the drums (roll-overs) sound a bit too simple (basic). But what I like most on this album is the fact that both gentlemen combine different styles which are closely connected to the dark electronic scene although their stuff also fits perfectly in the alternative dance scene.

Also important to keep in mind: the live-sound of this duo is as clear as on CD!

Conclusion: If you are into electro, new-beat, minimal, trance, and fan of Vitalic or Goose, check out this stuff!