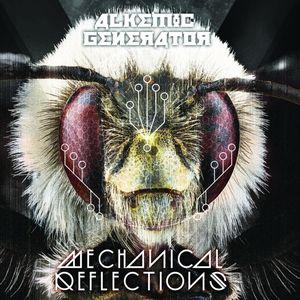 Content: Alkemic Generator revealed themselves to the world with the album “The Oniric Geometry” released two years ago by Nilaihah Records. The Italian formation went on writing new songs while Nilaihah Records seems to be on stand-by (and that’s a pity).

The 2nd opus has been released by the Russian label ScentAir and sees the Italian trio striking back with a rather open-minded electro-wave style. “Parallel World” takes off in a rather unpolished way and sounds inspired by dark-electronics powered by guitar riffs. The opening song is fully representative for the rather well-crafted and sometimes sophisticated work of the band. That’s what comes through on the few next songs, but especially “Back To Origin” caught my attention for the nice twist between powerful guitar riffs and refined arrangements. The vocals by Sonja Aveic complete the work with a kind of icy grace.

The production of the vocals becomes quite interesting on the title track. The way of singing sounds more like a sampling, which perfectly matches with the cool kind of electronic ping-pong sequences and the heavy danceable kick. I also like this song for its somewhat trance-minded structure.

The 2nd part of “Mechanical Reflections” is hiding a few more interesting cuts. The sound moves in between raw electro sound waves and darker, melancholic passages while the guitar riffs constantly inject an extra powerful element.

Last, but not least the album features two great remixes by Aesthetic Perfection and C-Lekktor. Both bands seriously boost the original versions of “Parallel World” and “Back To Origin”. Both remixes will possibly push Alkemic Generator to conquer some dancefloors.

Conclusion: Alkemic Generator remains a very unique band in the genre. Their new opus is not always that accessible, but reveals a band with a creative approach in the mix of different influences.