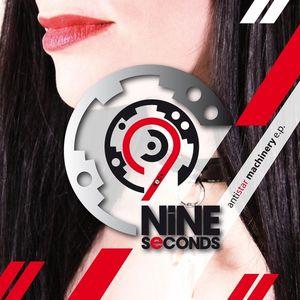 Content: Nine Seconds are back on track with this elf-released EP featuring 10 songs. Both albums of the band have been released by the Italian label Space Race Records while this is their 2nd self-released EP.

The title song originally appeared at their last album “Nothing To Confess” (2014). I expected the usual endless list of remixes, but this EP is different. Except for two remixes of “Antistar Machinery” we get 6 mixes/remixes from six different songs plus a previously unreleased track and a cover version. The original versions of all the mixes/remixes originally appeared on their previous releases. So this is an interesting way to get back to both albums “Poladroids” and “Nothing To Confess”, and also to their debut EP-vinyl “Irresolution”.

I was a little less inspired by the solid EBM orientation for most remixes. It for sure is one of the band’s influences although their work usually sounds more into electro-pop and body-pop. It for sure is a way to conquer dancefloors and that’s precisely what the “Club Mix” of the title song seems to claim. It’s a real smasher driven by a great bass line and a carrying chorus. I once more prefer the vocals of Oliver Spring singing on Nine Seconds instead of his previous band (cf. Sleepwalk).

A few bands were asked to create a remix and Cryo did a sensational job remixing “Waiting For The Last Kiss” into a pure club smasher. The “Club Mix” of “Attractive Lies” is another song I have to tip. The original song was seriously reworked into a divine icy and smashing approach.

Sleepwalk was asked to remix “Girl Panic” and here again the result is absolutely superb. It sounds hard while featuring impressive sound manipulations. MRDTC and Framework were asked as well to make a remix. MRDTC adapted the title song into a different –but still pure EBM style.

Over now to the excellent remix of Invisible Limits “Shadows”. It again sounds pretty EBM and driven by real cool sound manipulations. Last, but not least the new song “Not Guilty By Reason” is filled with modernism and some complexity. It remains pretty body-inspired but constructed by irresistible scratching sweeps and other cool effects.

Conclusion: This EP reveals a harder approach in the work of Nine Seconds, which will appeal to EBM-lovers. Speaking for myself it definitely is their best release to date, which will maybe serve as basis for the work to come.