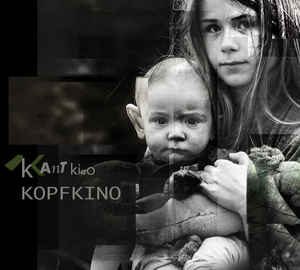 Background/Info: Kant Kino is not exactly the kind of band releasing new albums on a regular basis. “Kopfkino” is their third full length since “We are Kant Kino” released in 2010. The Norwegian duo seems preferring quality instead of quantity! “Kopfkino” delivers 14 new cuts plus a bonus of 15 songs on the bonus edition. The work is inspired by the daily life, which the members like to explore this way creating instant images in our mind. This kind of ‘inner-movie’ is called in German ‘Kopfkino’, which literally means ‘head cinema’.

Content: Kant Kino has always stood for old-school inspired EBM. It remains the main basis of their new full length, but I experienced the work as becoming more elaborate and even featured a few traces of ‘pop’. Don’t get me wrong, it remains pure EBM, but with an original and more personal touch on top. The songs are maybe a little softer than before, but they gained in maturity.

You’ll hear hard-hitting bass lines with a danceable kick on top mixed with catchy elements like crystalline bleeps. A few cuts are featuring female guest (backing) vocals, which is an aspect of their work they already experienced on previous work.

The limited edition of “Kopfkino” is an interesting selection of extra ‘new’ songs and remixes. Globally speaking the new cuts remain animated with solid EBM components while refined and getting catchier by some pop influences. The remixes have been made by an interesting selection of bands like Matt Echo, Atropine, Technomancer, Simon Carter, Electro Ferret, Lurendrei and Antibody. Epilektrician and Electro Ferret have each contributed to the writing of one new song.

+ + + : I definitely like the continuum revealed on “Kopfkino”. Kant Kino is not repeating them, but evolving in sound trying to integrate new ideas and different influences while holding on their EBM basis. The songs are more elaborated and diversified. Some of the most noticeable cuts are “Closer”, the more powerful “Annihilate”, the body-pop duo “Wrong” and another duo called “Want”.

On the 2nd disc I especially want to tip the new songs “Third Down”, “Sino (vs. Epilektrician) and “Silhouettes” (vs. Elektro Ferret). I also noticed a cool remix by their compatriots Technomancer.

– – – : I’m just missing a bit of the initial power, which was more present on previous albums. The body-pop approach is interesting, but I hope they don’t explore it more deeply.

Conclusion: “Kopfkino” is an album the fans were awaiting for a few years now. The work reveals a band in progress and evolution so even if “Kopfkino” is not my favorite opus of Kant Kino I think it’s a great piece because of its evolution in sound.

Since you’re here … … we have a small favour to ask. More people are reading Side-Line Magazine than ever but advertising revenues across the media are falling fast. And unlike many news organisations, we haven’t put up a paywall – we want to keep our journalism as open as we can. So you can see why we need to ask for your help. Side-Line’s independent journalism takes a lot of time, money and hard work to produce. But we do it because we want to push the artists we like and who are equally fighting to survive. If everyone who reads our reporting, who likes it, helps fund it, our future would be much more secure. For as little as 5 US$, you can support Side-Line Magazine – and it only takes a minute. Thank you. The donations are safely powered by Paypal.
Tags: Antibody, Atropine, EBM, Kant Kino, Technomancer