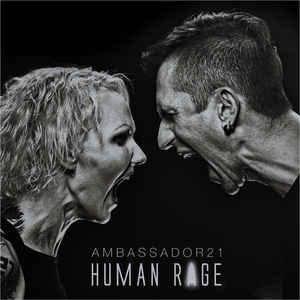 Background/Info: “Human Rage” is the newest full length album from the Belarus duo Natasha A Twentyone – Alexey Protasov. This album also is a kind of celebration for the band’s 15th anniversary. Ambassador21 has released an impressive number of productions, but always remained faithful to their unique industrial-punk and hardcore sound.

Content: The front cover of the album showing the faces of Natasha and Alexey shouting to each other perfectly symbolizes the sound of the album. I however have to say that the opening cut reveals a different approach, which is more into spooky vocals and bombastic industrial sounds. It’s a kind of intro preceding a much harder and merciless work where the duo gets back to the sources of their work.

“Human Rage” is the perfect symbiosis between industrial noises, hardcore rhythms and anarchistic sound treatments plus crazy samples. Sometimes technoid, but then driven by guitar riffs or revisiting the famous song “Eye Of The Tiger” Ambassador21 again takes you by surprise.

+ + + : Like them or not, but one thing remains for sure and that’s why I also deeply respect this band: there’s only one band like Ambassador21. Their sound brings contradictory elements and influences together. Nothing is weird enough, but in the end it simply works and sounds hard. I have to say the opening song –which also is the title song, really took me by surprise like revealing a new side of the band. I also enjoyed the more familiar cuts moving into power, terror and rage.

– – – : I regret they didn’t compose more songs in the vein of “Human Rage”, but on the other side it also stands for an atypical track.

Conclusion: Punk remains the muse of Ambassador21, which again inspired them to compose a hard, merciless and enraged work.