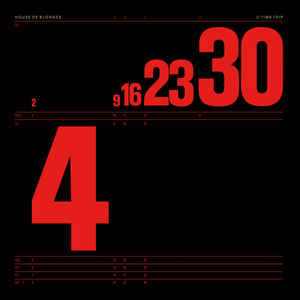 Background/Info: John Blonde and Chris Pace are operating from N.Y (USA). So far they released 2 albums on their own label Glowmatic Records while for this third full length they joined hands together with the international operating Alrealon Musique.

Content: House Of Blondes like to experiment with digital and analogue synthesizers. The magic of the analogue gear operates directly on the debut of the work. A few other cuts are pretty similar and sometimes reminding to Kraftwerk, but in a more experimental- and even abstract approach. Other songs have something evasive, like an exotic format of ambient music. It’s a rather diversified piece of music, which becomes fully accessible through the slow cadence.

+ + + : I’ve always been a huge admirer of analogue synths. They have this particular sound color, which is somewhere in between coldness and space-like atmospheres. This work reveals several cool vintage-like cuts. But I also like the more evasive and totally cinematographic style featuring subtle sound treatments.

– – – : A few cuts make me think of demo work that hasn’t been achieved. So I think they could have elaborated some of the tracks featured here.

Conclusion: House Of Blondes stands for modern experimental music although inspired by good-old analogue synths and early Kraftwerk music. This could be considered as neo-krautrock music!