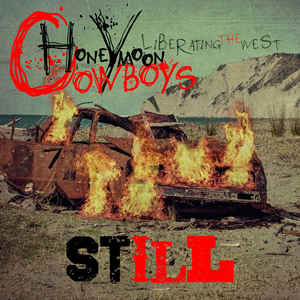 Content: Siglo XX was one of the darkest cold-wave bands from Belgium, but except a few new-wave reminiscences Honeymoon Cowboys sounds more into a rock’n’roll spirit. It’s a kind of dark-rock music with some extra cold-wave elements on top while driven by an impressive vocalist.

“Still!” is a refreshing composition, a bit ‘chanson’-like and reminds me of Nick Cave. But here again the bewitching timbre of voice of Tom Van Troyen excels like a hybrid of Tom Smith (Editors) and Nick Cave. He sings in a passionate way like injecting a real spirit to the music.

The sound reveals a real maturity and you can hear a real passion coming through. I even get the impression that Honeymoon Cowboys are revisiting some parts of The Doors (cf. “Everything Is On Fire”) while it’s a song originally written by Siglo XX. There also is an intimate and brilliant reworked version of “Waiting For A Friend” originally written by… Siglo XX.

+ + + : The shadow of Siglo XX clearly hangs over this album, but it doesn’t sound at all like an emulation. It rather sounds like they took the best from the past mixed with a more contemporary approach while carried by a genius vocalist. The debut songs are impressive; they’re well-crafted and revealing a delicious harmony between all of the aspects.

– – – : I regret the live songs featuring cuts that have been already released on their previous live album. Let’s hope that the band will move on and will bring back a complete studio album.

Conclusion: Siglo XX has been resurrected revealing a funny rock approach and a great singer with a sexy voice. This is maybe a new beginning for a great formation.

Best songs: “Sea Without Mercy”, “Everything Is On Fire”, “Time Is Not Our Friend”, “Closed Souls”, “Waiting For A Friend”.