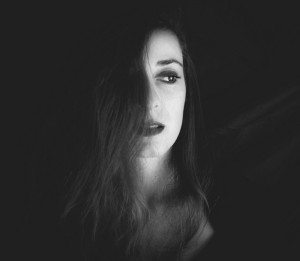 Kriistal Ann refers to the word ‘crystal’ and the real forename Anna of this Greek artist. The name was invented by Anna’s partner who got inspired by Annihilator’s  song “Crystal Ann”. Anna is involved in different bands, but her solo-project caught my attention for its versatile aspect when it comes to mention all influences. The album “Cultural bleeding” released on Wave Records revealed a fascinating electro-minimalism, which made me decide to know a bit more about this artist.

Q: You were involved as singer in Resistance Of Independent Music and Paradox Obscur so what were the reasons and maybe the sound you’d in mind that pushed you to set up Kriistal Ann?

Anna: I remain a main member of both aforementioned bands. And we’re still making music.

Creating Kriistal Ann project was a need for something purely personal; a self appraisal of my abilities, self-expression, my placement in time… a reflection of my being.

Q: Kriistal Ann is a solo-project, but you clearly seem to like working with other artists and I refer to Aidan Casserly (Empire State Human, The Garland Cult) on your latest album “Muse”. Tell us a bit more about it and especially the kind of sound you’d in mind?

Anna: I love working together with like-minded people. With Aidan we have a deep friendship. We have common views and share the same love for art in general. So this collaboration came naturally, so instantaneously!

He suggested us to do an acoustic album which does not resemble anything of what we have done so far… where we will unite our sensibilities, our mutual passion for music as a means of emotion, which one will be inspired by the other to create a unified whole. It’s an acoustic bed, which we would expand and add more ambient-, dark and acoustic vocal genres over sonically. There’s a jazz edge as well as a pop and ballad influence. These musical roads, where the beginning points into the songs and then into this, we poured our own hearts and souls and our poetry too.

Q: “Muse” indeed sounds pretty jazzy compared to an album like “Cultural Bleeding”, which is into minimal-electronics. What does it say about your influences and how did you manage the move from one album to another?

Anna: My first influence in music was classical music. I started playing piano when I was 5 years old. I grew up in an art-loving environment and this has fostered in me the need to follow these paths.

I never adhered to a particular genre of music, I love contemporary jazz, rock, soundtracks for movies etc. So it was something familiar for me to point retraction in such a musical environment like “Muse” album.

Over the last 10 years, I engaged myself in electronic music. My mentor ‘Toxic Razor’ learned me a lot about this genre and I combine all elements with some concrete knowledge I had about the orchestration.

The truth however is that most fans of my music come from different scenes such as metal- & rock music, despite both from minimal electronic, which for them may seem strange or perhaps not so familiar with the experiments and intense vocals.

Q: Tell us a bit more about your way of working and more especially about the creation of sounds, equipment, recording and mixing?

Anna: Obviously we belong to the few last ones, my solo-work and the bands I run with my partner, where we maintain the traditional way of recording. Using hardware synthesizers and recording in real time.

Life maybe gets more difficult so, but the result always justifies me/us, because the sound retains its naturalness, spontaneity, raw beauty and feel of vintage..

Usually there first is a rough planning of drums and tempo, then I try finding a suitable and satisfactory bass line, which I played live until the end of the song. After this process I moves on building the basic melody by selecting a suitable sound and so on… At the end framed vocals, preceded the writing of the lyrics. The final mix is made in the console, without any use of software.

Q: I noticed you’re not only involved into music so tell us a bit more about the other artistic projects you are dealing with?

Anna: Art is a soul retreat. It is an instrument that ennobles people. However, to enable you to enjoy it, you should be trained in this and has to devote time to develop the aesthetic criteria.

I dig out beautiful things by reading literature and poetry. Learning to flee the center of myself. I entered the process to write some short stories and poems which I usually do the setting to music. One of which has been issued, in short stories collection. But all this more for personal pleasure and to have to share with like-minded people in my life. To share our views…

I deal with photography as well, loving the B&W analog photography. I especially like the portraits, when I find people who are willing to offer me a little of their personal lives and their time, I capture them… Someone can find a small sample of my work , in my Flickr page as Kriistal Ann.

One art form is capable of affecting the other and function as a means of inspiring. As well the acts and human’s life..

Q: Do you already have new work in the pipeline?

Anna: I’m currently working on the completion of two new albums, this time for one of my new projects that is called Sine Silex, where I undertake the music production. It will be released by the end of the year. This will have the taste of dream-pop with intense atmospheres and transitions, with French – English lyrics.

Next there’ll be the third album of Paradox Obscur revealing dark, cold-wave and minimal 80s synth-wave influences. This album is planned to be released for next year.

And there’s more; my last solo-album “Cultural Bleeding” has just been re- released on vinyl edition by Wave Records.