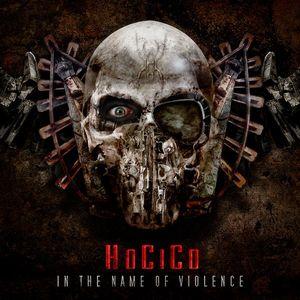 Content: Hocico is one of those dark-electro acts, which simply belongs in the top of the genre. The Mexican duo needs no further introduction and strikes back with a title that clearly indicates what their sound is all about.

Hocico stands for terror- and horror electronics. It’s not exactly the kind of ‘feel-good’ music while the new EP clearly indicates what you are going to endure. I’m always excited to discover new work from a long-time established act, but I honestly have to admit that “In The Name Of Violence” took me by surprise.

The title song is one of the biggest potential hits of Hocico in years. This is a masterpiece in the truest style of this group, but with some extra harshness, a cold, carrying melody line and charismatic, distorted vocals. This song stands for violence and power and will rapidly become a club song you simply can’t escape.

Next comes the song “Silent Crow”, which is much more than a usual B-side cut. Hocico again has been driven by rage leading to a fast and furious composition. There’s no compromise possible, you simply will have to endure the devilish assaults of those deranged Princes of darkness.

The next and main chapter of the EP features four remixes of the title song. And here again Hocico took me by surprise for the eclectic choice of the different remixes. They started with an own remix called “Sex-O-Sex Version”, which is an alternative, but still furious version of “In The Name Of Violence”.

Faderhead transformed the original mix into a more EBM-inspired cut, which shows a different approach and other influences. Xotox injects an industrial boost to the song while the last remix by Colts is the most surprising one. This remix sounds like another song, which moves in the purest vein of IDM and electronic minimalism. This remix is a real tour de force and a totally creative adaptation of the original song.

Conclusion: “In The Name Of Violence” definitely is one of Hocico’s best and most creative EPs in history. The title song is a pure master piece while the remixes stand for diversity and creativity.