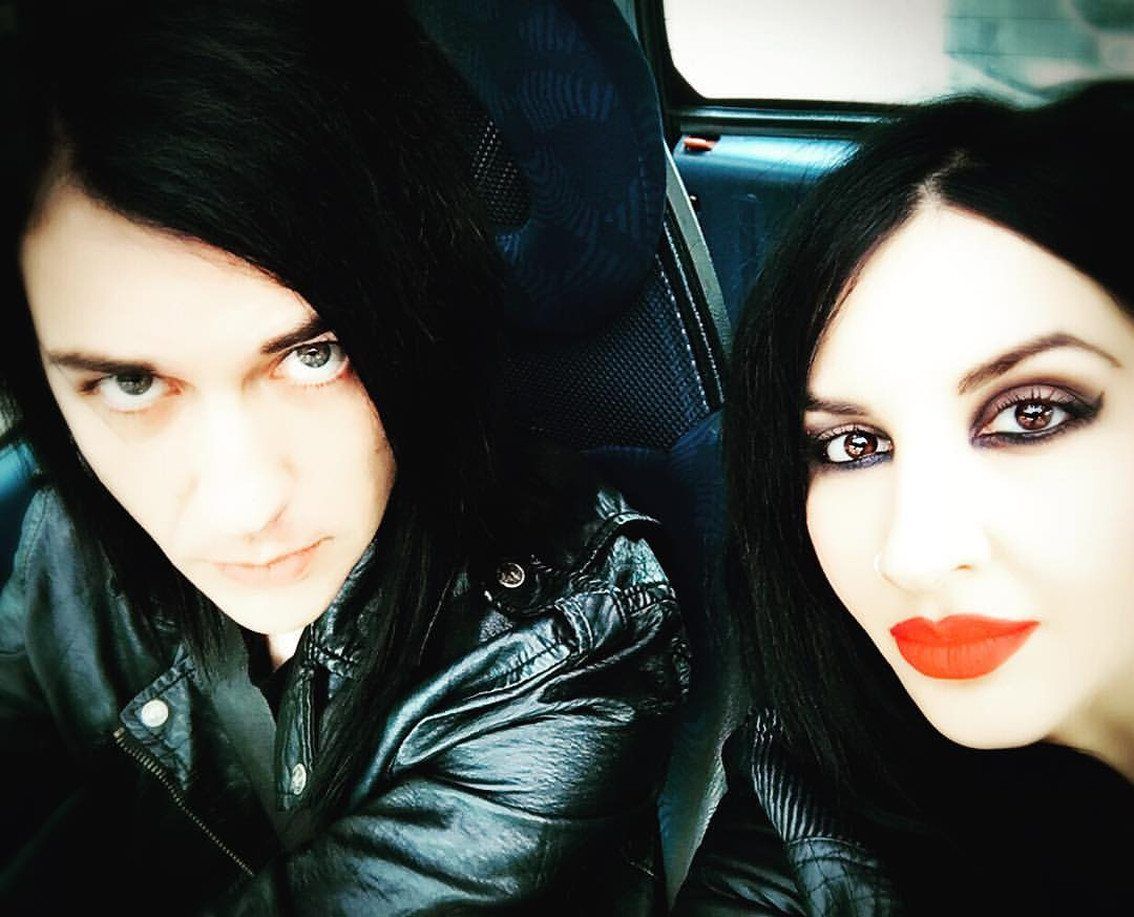 We got in touch with N0emi Aurora and maXX from the Italian electro-goth-metal act Helalyn Flowers to hear some more about their newest album “Sonic Foundation” out since a few weeks. Not a coincidence because the album, the follow-up to the “White Me In // Black Me Out” released back in 2013, is doing exceptionally well and has even succeeded in entering the higher regions of the metal charts on iTunes, Amazon, etc. although the electronic element is still pretty much audible in their work.

The first demo of this song dates back to 2006, those days when we wrote “E-Race Generation”. We waited to publish this song to give it the right spotlight, and we decided that Synthetic Paranoia would be the perfect opening-track for an album like “Sonic Foundation”. It’s a pure Helalyn Flowers song, close to our early stuff, though it shows elements that are new to us, like the sci-fi finale that’s an echo of the most electronic Queen (“Flash Gordon” or “Highlander”), Bowie or some Hi-NRG of the 80s. This song introduces a futuristic concept about the de-humanization of the senses. A continuous battle between the will to express our own instinct and the need to find a way out from the static nature of our common habits.

This song comes from a draft of synth that Max had filed for one of his side-projects. We use to share all our ideas, so when Noemi listened to the synth refrain she asked Max to let her sing on it. Vocals came out at once, so guitars and the rest of the arrangement. It became a Helalyn Flowers single in a flash. This song inspired us the concept that not everything is what it seems. We should not stop at the very first perception. There are many other details that we can see only in the dark.

‘We are all stars, but we can’t shine without passion’. That’s the concept of ‘Frozen Star’. This is a vocal song. As for some other songs from the album, this track was born from Noemi’s vocal line and her solo-guitar, then Max added some armageddon-like guitar riff and we arranged the rest of the song and programmings together in our studios. Our aim was to give to the verse a mechanical and glacial atmosphere, so we used a vocoder effect on the vocals, blending TC-Helicon gear input and digital editing.

Another track born from the vocals, in this case, from a smashing jingle that tormented Noemi’s mind for days.
Not as our usual, lyrics were written before music. This is a wayward song, a hymn of revolt against the idea of an irriversible fate. This track represent our harsher metal face, focusing guitars like razors and energizing House-upbeats. You can find another version of this track on the bonus disc.

At the beginning the title of this song was ‘Whores Of Perception’. It came from a Max’s guitar riff as it was meant to be a tough, bitter song. It’s the most vicious song from the new album. Here we talk about addictions, blood, sex and the return of the angry, hungry Gods of Babylon. You can figure it as a world where fatality is determined by premonitions, perception, magic. On the second verse of the song, Noemi is singing in Italian, Latin, French and German as she’s refering to the Babel’s tower seen as the release of chaotic forces. Musically, it shows different faces of our spectrum, be it Dance, Metal or Dark/ Wave. There are even some Hip-Hop grooves here and there.

We can define it our way to play Glam-Rock. During those days of songwriting we used to watch a lot of sci-fi and surrealist movies like David Lynch’s “Twin Peaks”, “Eraserhead”, Tony and Ridley Scott’s “The Hunger” (both movie and TV-series)… Noemi’s phone was full of vocal lines she recorded inspired by these themes. When Max listened to ‘It’s coming now’ draft, he quickly re-created a futuristic view of a Glam-Rock song. Here everything lives between two dimensions. This song refers to how playing with evil and the darker side within yourself can allow you to be consumed by your inner fire. A fire that, like fear, or love, opens the portal beween two worlds. But what would happen if you see it coming from the outside?

We use to pass hours at our studios. It was very late at night, Max was very doubtful about a drum-n-bass sequence he wrote. Luckily, Noemi had the intuition of turning the track by speeding up the BPM. So the whole track was written during the rest of the night. It was morning and we had a full song complete. The song-title itself was inspired by our altered state of mind, but above all, we were influenced by David Bowie’s “Outside” album. Have you ever lived some kind of trance? Where you feel something near, like your own shadow, running after you?

“Maths Of Chaos” is such a provoking and sarcastic Rock and Roll song. Musically, it’s like melting Motorhead and Sigue Sigue Sputnik, but generally it shows some of our most aggressive background. Guitar-riffs were inspired by Bathory, Metallica, Destruction on purpose. It’s part of our DNA, we want to show it. It came pretty natural to drag Angelspit in this venture! Zoog took care of synth-basses, voco-drums, noises as well as male vocals. He got stuck 100% as it was meant to be!

The most atmospheric track from our new album. The sound is spectral, rocked by a wiched vocal litany that gave birth to the song. Here guitars are dark and hypnotic, like an electric mantra punctuated by witch- drums.This song is very intimate… We really trust in the power of the woods that we live near by. They give us a great inspiration. In this track we talk about a ritual from which we can’t escape. A hungry force of the nature laying underneath our skin, ready to eat us alive.

We use to escape from the unknown, and we define ‘bad’ all that we can’t control. This song is a prayer for the world disease, a way to come closer to Evil and discover it with our eyes, in order to exorcise its power. Musically, it comes from that hypnotic guitar-bending at the beginning of the song. We wanted to give it a bluesy approach, quite and nervous at the same time. The structure of the song is pretty unusual, it developes through five different moments and moods. Absolutely the most difficult song to produce and mix. It’s something like 90 tracks at least. The guitar-solo on the bridge is the actual first one that Max demoed when we were writing this song. When we were about to record definitive guitar tracks for the album, we agreed that this part should have sounded rough and primitive. Playing it ‘correctly’, with the right tune and so on, wasn’t the same. On the contrary, we pushed the ‘broken’ effect.

Not by chance the latest track of the album. This song was born from Noemi’s vocals and piano and we wanted to leave it simple and clean. We can define it our very first ballad. We wrote lots of mid-tempo songs but never a ballad. It’s a kind of Industrial one if you want, it’s not a typical Pop-Rock maudlein. It has many moods, but mostly it’s the perfect leave. The final choir says “these lies are human, these lies are death, these lies are broken and we’ll send ’em back” as it’s going to exorcise all the darkness we evoked during the rest of the album, which climax is “For All The Bad Things”. Nothing lasts forever. Spells can be broken.

More than asking for a traditional remix, we wanted to involve Blutengel’s Chris Pohl on this track leaving him free to add his vocals and interpretation to our first single off the album. We wanted somebody able to understand the nature of our track and we thought that Chris was the artist nearer to our way to work. He was really enthusiastic about the song and so, he was immediately involved with passion and professionalism in the project. The result was huge! If one day Helalyn Flowers and Blutengel would fuse together, well here you have a taste of how it’d sound like!