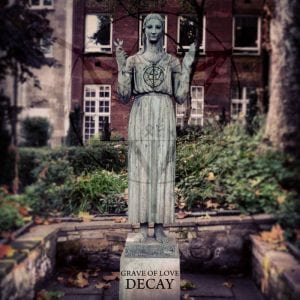 Background/Info: Michal Kielbasa is a Polish musician who’s inspired by some of the most famous neo-folk artists. “Decay” is the artist’s official debut work, which has been released in his homeland on the established Rage In Eden Records.

Content: “Decay” takes off with stereotypical neo-folk songs. The artist is clearly inspired by Death In June. That’s an element you clearly can hear in the music, the image and even some lyrical references. But some songs also touch ground with more industrial-like creations. These songs are more tormented and sound-wise pretty different from the opening part. I also noticed the quite surprising “The Flower Forever Dies”, which sounds inspired by the famous post-punk like “Warm Leatherette” from The Normal.

+ + + : If you’re into neo-folk music and you’re not in search of something new, this album might fulfill your expectations. I prefer the work for its darker content revealed anguished atmospheres, which perfectly fit with the spooky vocal parts. The industrial input is also worthy of examination. “Decay” sounds pretty diversified covering multiple-, but related music genres.

– – – : Grave Of Love reminds me of multiple ‘debuting’ formations who’re in search of sound identity. I don’t have anything against varied compositions, but this artist deals with the different music genres he likes instead of focusing on one specific style. The neo-folk style is too cliché and without real interest.

Conclusion: Grave Of Love uses a wide sonic canvas and can be better elaborate the most interesting idea running through this debut work, which appears to be the industrial side.