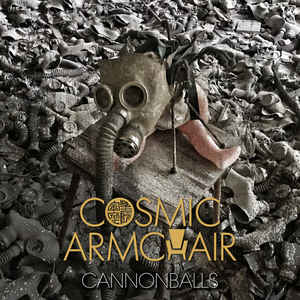 Background/Info: Singapore electro-dance-pop duo Cosmic Armchair remains one of the sonic aliens from the Alfa Matrix stable. This new EP features the title song “Cannonballs”, which was originally released on their last year released “Contact”-album.

Content: “Cannonballs” was not exactly my favorite cut from the album. It however sounds as a kind of ‘happy-pop’ song carried by a solid bass line and a cool chorus. The vocals of ‘Cosmic Jane’ add a fragile and somewhat sensual touch on top of the song.

We next get a remix by Avarice In Audio plus a “Club Mix”. The last song, “Fly Away” is another look back to “Contact” and has been remixed by Axiam (producer based in Singapore).

+ + + : “Cannonballs” as EP title track makes sense. The original version is an honest cut while the “Club Mix” injects an extra boost to the track. The song is somewhat darker than the usual dance-pop of the band. The remix by Avarice In Audio is cool and I think it’s the perfect band to remix Cosmic Armchair.

– – – : The remix of “Fly Away” doesn’t add any extra to this EP. We here move back to the pure dance-pop style of Cosmic Armchair, which can’t totally convince me.

Conclusion: “Cannonballs” is probably one of the best EP title-songs I’ve heard from Cosmic Armchair. That’s probably because it sounds a little darker, but especially less dance-like.