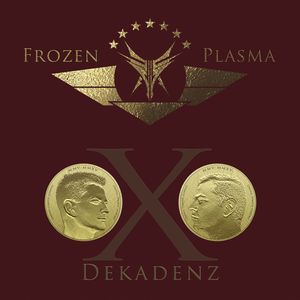 Content: This is the first studio album in 6 years for Frozen Plasma and their 3rd opus ever. I was eagerly waiting for this new work as the previously released EP “Crazy” was an absolute pop-smasher and in my opinion one of the best songs of the last year.

“Dekandenz” features 14 songs and a non-stop succession of outstanding synth-pop treatments. Vasi Vallis is, according to me, one of the most talented and open-minded electro artists of the scene. He’s an outstanding melody maker, but more generally speaking an exceptional sound architect. Frozen Plasma is a band with a very personal sound and typical ‘Vallis’ arrangements. Frozen Plasma is not reinventing electro-pop, but clearly has its very own sound-DNA. “Dekandenz” is the most accomplished Frozen Plasma album ever. All the songs are carried by brilliant melodic loops and elevating choruses. Most of the songs reveal a sweet taste of melancholia while a few cuts have been empowered by somewhat EBM-minded treatments and darker sound layers.

But a great synth-pop band also needs a great singer and that’s precisely the perfect match between Vasi Vallis on one side and Felix Marc’s vocals on the other. He has a clear and captivating voice, which totally fits the sound of Frozen Plasma.

To be honest with you I noticed 13 great songs and one final cut, which is a kind of an ‘outro.’ I think I might already confirm that “Dekandenz” will become one of the ‘electronic highlights’ of 2015!
“Crazy” remains one of the absolute smashers, but I also have to mention a few more potential hits like “Age After Age” and “Maniac.” All the songs have been written with a similar formula and that’s probably why there’s a succession of great songs. The biggest surprise, but not the most original song, is the cover version of Trans-X legendary hit “Living On Video.” This song has been covered by numerous bands, but I have to admit that Frozen Plasma’s version is great reworked remix with a darker and harder approach in sound. The vocals of Felix Marc are well-produced (while he also sung the French female spoken words of the original song) and fitting with this song. But the main part of this cover comes in the end when the song turns into trance-minded loops.

“Saving This Moment” is one more potential hit holding on to the main ingredients of Vasi Vallis’ secret sound formula. I once more fully enjoyed the melodic spirit of the song. Notice by the way nearly all songs have been sung in English. “Hertz”, which was previously released on EP as well, is one of the few German sung tracks. But the language doesn’t make any difference when the balance between music and vocals remain that close to perfection.

Notice by the way that the album has been released on CD-format by Emmo.Biz while a special box featuring fan material (including a T-shirt) is available as well.

Conclusion: I think there’re not many albums generally speaking that feature a non-stop succession of outstanding songs next to a few real hits. “Dekadenz” sounds like it is coming from another music planet, but will for sure seduce the synth-pop universe.

Since you’re here … … we have a small favour to ask. More people are reading Side-Line Magazine than ever but advertising revenues across the media are falling fast. And unlike many news organisations, we haven’t put up a paywall – we want to keep our journalism as open as we can. So you can see why we need to ask for your help. Side-Line’s independent journalism takes a lot of time, money and hard work to produce. But we do it because we want to push the artists we like and who are equally fighting to survive. If everyone who reads our reporting, who likes it, helps fund it, our future would be much more secure. For as little as 5 US$, you can support Side-Line Magazine – and it only takes a minute. Thank you. The donations are safely powered by Paypal.
Tags: Frozen Plasma