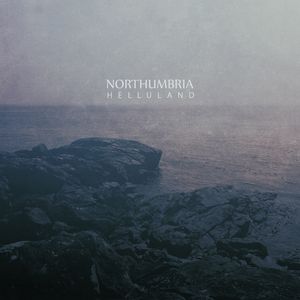 Content: Northumbria is one of the newest signings on the Cryo Chamber label. Set up by Jim Field (who you maybe know from the gothic-minded Rhea’s Obsession) and Dorian Williamson, both members were already active under the Holoscene moniker.

Northumbria joined their new label to unleash their 3rd album.
“Helluland” reminds me of the great Northaunt project. There’s a similar cinematographic approach in sound however Northumbria defines their sound as ‘ambient-metal.’ I think there’re similarities in the dreamy and abyssal content of their work. And I guess it’s not that of a coincidence if both projects are inspired by landscapes of their own country. I was not that surprised to hear that “Helluland” is inspired by the Norse discovery of Baffin Island (Canada) over a thousand years ago. The Vikings called this new discovery ‘Helluland’, which can be translated as ‘the land of flat stone.’

From the very first notes you’ll feel like you are entering an imaginary sound abyss. The music sounds dark, but rather relaxing. The main characteristic of Northumbria –and that’s probably why they call their sound ‘ambient-metal’ is the use of guitar, which has been seriously transformed and reworked into pure ambient creation. Most of the songs reflect a real prosperity although “Sacred Ground” is definitely darker and even reminds me to Lustmord.

“Helluland” is a cool sonic travel, which next to dreamy cuts and a few real dark and haunting tracks reveal a soundtrack approach. It sounds delicate and mysterious. These tracks are more into refinement and “Catch A Falling Knife I” is a real attention grabber here. I like the kind of isolated guitar notes that create a beautiful, but sad impression.

The title track is an absolute apotheosis in a similar genre. The guitar manipulations are absolutely fantastic here while this track is a great match between reverie and melancholia. “Helluland” also is the longest track on the album.

A last essential composition is “Catch A Falling Knife II”, which is one more essential cut leading you safely to the ultimate destination of this great ambient adventure.

Conclusion: I enjoyed the dreamy and sometimes freaky progression of this album, which sounds like great ambient music has to be.