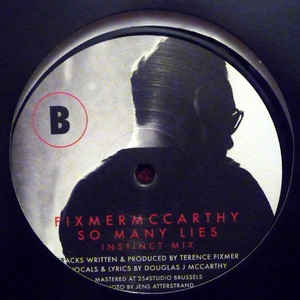 Background/Info: This is the meeting between one of the living legends of EBM (cf. Douglas McCarthy from Nitzer Ebb) and one of the pioneers of the so-called techno-body-music movement (cf. French producer Terence Fixmer). Both artists already released 2 full lengths and a few EP’s but their last work got released in 2008. So we might speak about a comeback!

Content: “So Many Lies” features 2 songs. The title-song is a rather typical Terence Fixmer composition getting us back to pure EBM-minimalism wrapped with dark-technoid vibes. The typical, repetitive loops are quite typical for this artist. And at the other side you get the charismatic and powerful vocals of Douglas McCarthy who hasn’t lost his magic sensation.

The B-side features the so-called “Instinct Mix”, which reveals a harder version. This is more into industrial elements making the original song rougher. The vocals have been produced in a more fragmented way.

+ + + : This is a cool song without a real surprise, but the biggest surprise for sure is the comeback of this successful duo. Fixmer is a mature and genius techno-body composer and McCarthy just one of the best vocalists of the EBM scene. I like the somewhat industrial mix on the B-side.

– – – : One song and one remix is not that exciting to speak about a real comeback, but let’s hope this is just a teaser for more new work.

Conclusion: The success formula of this duo is quite simple: you take one of the best EBM singers and a dark techno-body producer with a visionary approach. The result is a minimal, but reinvented EBM formula!