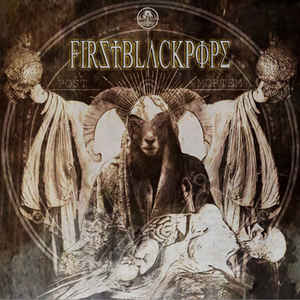 Background/Info: The Italian combo First Black Pope is clearly not the most renowned band active in the wider fields of dark-electronic music and yet I’ve always been seduced by this formation. “Post Mortem” is the third full length of the band, which was already released several months ago now.

Content: “Post Mortem” became a heavy and merciless fusion between quite typical dark-electro music and heavy guitar riffs. The haunting electronic style for some of the leads  might remind you of Suicide Commando and to Leather Strip for some of its sequences. The empowering guitar playing clearly injects an industrial-metal flavor, which makes the characteristic of this band, but not from the music genre. The vocals are somewhere in between rage and a ghost-like expression.

+ + + : “Post Mortem” is a violent production, which will appeal for dark-electro freaks, and also to a ‘harder’ audience listening to bands such as Freakangel, Seraphim System and related bands. The sound is not innovating although First Black Pope has something on their own. I like the power running through the work, which is sometimes accentuated by a few epic arrangements.

– – – : The only –and important element from the album I was a bit disappointed with is the mixing. The sound is pretty compressed and has a dirty production. This album is maybe missing an ‘absolute’ hit, but globally speaking this is a great tracklist.

Conclusion: If you don’t know yet First Black Pope, I can only, but recommend you to put your hand on this work to discover the ultra-violent work of this formation.