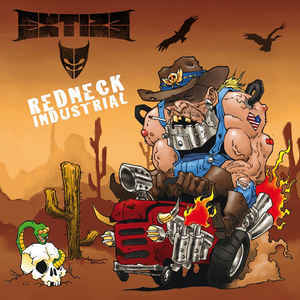 Background/Info: Extize started out as a real hot and promising newcoming band revealing a great body-techno sound and a cyberpunk look. “Redneck Industrial” is their fifth full length album to date, which has been released on a new label.

Content: The sound of Extize has simply evolved with the years, but remains strongly inspired by dark-electronics and EBM standards. The main innovation is a totally weird addition of ‘country’ and especially ‘Western’ sound influences, which both explain the title of the album. It’s really funny to hear hard electronics mixed with some (sampled) banjo riffs, but it simply makes sense because it works.

Next to the aforementioned influences “Redneck Industrial” also reveals some groovy industrial passages and even a kind of industrial-pop touch. I also noticed a kind of electro-ballad. But the craziest part consists of a few phone hoaxes by one of their members (Bill).

Last, but not least the final chapter of the album features remixes by Pete Crane (Shiv-R), Synthattack, Binary Division, Nitro/Noise and Omniwar.

+ + + : The sound is perfectly reflected in the artwork of this opus. Extize will have a serious chance to win the award for the weirdest electro-underground band, but you know what, I like those guys. They not only make great and original music –their ‘redneck industrial’ music sounds irresistible, but they also make me laugh. Those guys don’t take themselves too serious, but they’re serious in what they’re doing. The music mixes numerous influences and Extize has progressively reached a much more personal and mature sound.

I also noticed great remixes and I especially want to mention the ones made by Pete Crane, Synthattack and Binary Division.

– – – : I can imagine some people will absolutely not laugh with the hoaxes. The only song that couldn’t really convince me is the more ballad-inspired “Back To Home”.

Conclusion: “Redneck Industrial” is a work mixing fun and several potential hits so in the end we can speak about a sexy band… although I’m not sure John Wayne would have loved those guys!