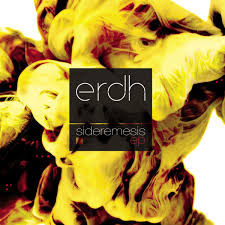 Content: Erdh is a French duo operating from Paris. Nicolas Pingnelain is a member of Obsküre magazine while vocalist Emmanuel Lévy has been involved in several bands like Wormfood, Carnival in Coal and The Lovotics. After a debut EP released in 2012 Erdh is back on track unleashing 4 songs revealing a particular sound, which is hard to define.

“Sideremesis” sounds like the offspring between different influences, which are sometimes switching from one to another in the same song. The title song is a remarkable and enigmatic exposure of the band’s approach and sound concept. There’s a clear minimal electro writing driven by a slow rhythm and crowned with astral bleeps and atmospheres. It’s a kind of electro-ambient composition, which is accomplished by whispering vocals. There’s a tiny Haujobb flavor emerging from this song while the 2nd part of the track moves towards a pure cinematographic style carried by a kind of dreamy guitar sounds.

The next 2 songs reveal subtle bleeps and a true artistic creation, which however remains quite enigmatic. Both songs are in the line of the opening part of “Sideremesis”, but without the explicit soundtrack influences.

Last, but not least we also get a remix of “Pink Circuit”, which is a song that was originally released on their debut EP and, which has been remixed by the genius electro-tribal project Mlada Fronta. This song again reveals minimal sound treatments although it’s hard to recognize the typical stamp of Mlada Fronta.

I also want to mention the artistic digipak of this EP.

Conclusion: Erdh definitely tries to innovate with an unusual electro-style, which is hard to label, but enjoyable to listen to.

Since you’re here … … we have a small favour to ask. More people are reading Side-Line Magazine than ever but advertising revenues across the media are falling fast. And unlike many news organisations, we haven’t put up a paywall – we want to keep our journalism as open as we can. So you can see why we need to ask for your help. Side-Line’s independent journalism takes a lot of time, money and hard work to produce. But we do it because we want to push the artists we like and who are equally fighting to survive. If everyone who reads our reporting, who likes it, helps fund it, our future would be much more secure. For as little as 5 US$, you can support Side-Line Magazine – and it only takes a minute. Thank you. The donations are safely powered by Paypal.
Tags: Erdh