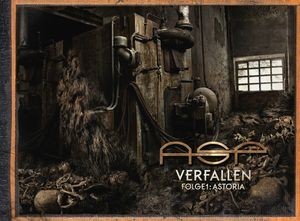 Content: ASP is a long-time servant of the Trisol stable and an acclaimed band in homeland Germany. The band driven by the genius of its front man Alexander F. Spreng strikes back with a new and conceptual work.

I first of all would like to say a word about the exceptional artwork made by Joachim Luetke. I discovered his horror & dark sci-fi creations when he was working for Sopor Aeternus, but he also worked with other famous bands like Marilyn Manson, Dimmu Borgir ao. Luetke once more did an amazing job by illustrating this album in a dark and sinister way, which totally fits with the concept of “Astoria”. Notice by the way that this album features 2 booklets.

The new work of ASP has been inspired by a haunting short story entitled “Das Fleisch Der Vielen”. The first chapter and concept deals about the Hotel Astoria in Leipzig, which was a flamboyant place during the early 20th Century, but now left to ruin for 2 decades. The glossy booklets feature numerous old pictures of the hotel, which illustrate the truly spirit of the place and its architecture.

Sound-wise ASP accomplished one of its more versatile works to date. The band defines their sound as ‘gothic novel rock’, which I have to agree is quite representative for the influences running through the work over all of the years of the bands history. Most of the songs deal with a dark-rock and gothic sound, which sometimes becomes empowered by some metal riffs. The global production has been accomplished with some melodic electro arrangements and piano sounds. It makes the sound sweeter and more accessible, which is a formula that works well on the choruses. There are some real beautiful songs featured on this work.

ASP remains inspired by hard-driven cuts with some extra metal flavor on top, but also with some soft and sometimes wafting pieces. A few songs come pretty close to the ballad style, but still to cinematographic music. The song “Zwischentöne: Blank” refers to the ‘novel’ style of the band while it also might remind you of some legendary gothic bands like Goethes Erben and I also want to mention the pretty slow-like “Alles, Nur Das Nicht!” on, which ASP clearly accomplished a pure emotional-like composition.

Conclusion: ASP holds on its dark-rock and gothic inspiration, but this new work is more diversified in influences than ever before. This will be for sure a successful album in Germany!

Since you’re here … … we have a small favour to ask. More people are reading Side-Line Magazine than ever but advertising revenues across the media are falling fast. And unlike many news organisations, we haven’t put up a paywall – we want to keep our journalism as open as we can. So you can see why we need to ask for your help. Side-Line’s independent journalism takes a lot of time, money and hard work to produce. But we do it because we want to push the artists we like and who are equally fighting to survive. If everyone who reads our reporting, who likes it, helps fund it, our future would be much more secure. For as little as 5 US$, you can support Side-Line Magazine – and it only takes a minute. Thank you. The donations are safely powered by Paypal.
Tags: ASP