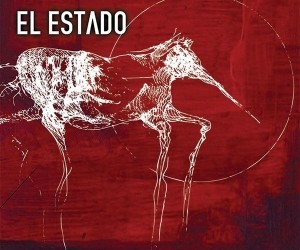 Background/Info: Hailing from Mexico this band unleashes their debut album featuring 8 songs. The work was composed in between 2014 and 2015.

Content: El Estado clearly seems to be inspired by the harder realms of rock and metal music. The majority of the songs are driven by a fast cadence, which accentuates the furious element of their sound. Electronic treatments can be noticed as well. I also noticed a few and rather cool epic arrangements, which make the global production more voluminous and powerful.

The work also features a few softer cuts, which are more into a kind of reverie and cinematographic approach. Most of the songs have been sung in Spanish, but I also noticed English vocals.

↑↑↑: The most powerful cuts appear to be the most significant songs of the album. There’s an interesting twist between heavy guitar riffs, a fast rhythm and electronic treatments.

↓↓↓ : The main point that hurts concerns the vocals. I’m not that fond of the Spanish vocals, but especially the way they’ve been produced is somewhat ruining the global aspect of the production. This is for sure a point to improve while the English vocals clearly are more accessible.

Conclusion: I can’t speak about a successful debut although El Estado reveals some interesting ideas and a powerful sound, which might serve a basis to move on with.