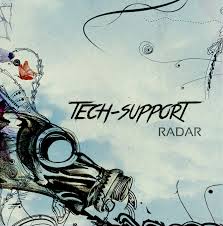 Background/Info: Tech-Support is a side-project from a member of the Mexican El Estado. “Radar” is the debut work featuring 10 songs.

Content: Set up by Dario Rodriguez this album clearly sounds different from the industrial-rock inspired approach of El Estado. Tech-Support explores different aspects of techno music while incorporating soft break-beats and industrial influences. The dark-electronic treatments inject a minimal touch to the global production. “Radar” is not exactly what I would call a traditional techno production, but a kind of free-techno exposure.

The tracks feature multiple flat tones creating a cool match with the darker elements of the composition. Most of the cuts are driven by linear and repetitive loops. Some songs feature male vocals, which are not always that convincing. I also noticed a rather weird, but interesting feature of a kind of traditional folk vocals by a female singer on “Uno Dos Y Tres”, but it’s a pity that the male vocals are somewhat ruining the song.

↑↑↑: The idea of mixing technoid elements together with darker and somewhat industrial influences is the main strength of this work.

↓↓↓ : It all sounds like the production has been composed by a lack of equipment. It sounds amateurish and there are different elements of the work that has to be reconsidered and improved.

Conclusion: I’m into the idea of mixing different influences together with a technoid basis, but the result leaves me skeptical about the potential of this project.

Best songs: “There Is No Tomorrow”, “Solar Storm”.

Since you’re here … … we have a small favour to ask. More people are reading Side-Line Magazine than ever but advertising revenues across the media are falling fast. And unlike many news organisations, we haven’t put up a paywall – we want to keep our journalism as open as we can. So you can see why we need to ask for your help. Side-Line’s independent journalism takes a lot of time, money and hard work to produce. But we do it because we want to push the artists we like and who are equally fighting to survive. If everyone who reads our reporting, who likes it, helps fund it, our future would be much more secure. For as little as 5 US$, you can support Side-Line Magazine – and it only takes a minute. Thank you. The donations are safely powered by Paypal.
Tags: Tech-Support