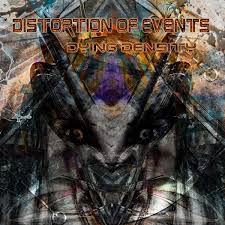 Background/Info: Distortion Of Events is an American band set up by Michael Lubert around 2010. The sound of this project has always been hard to grasp while it also consists of an interesting mix of electronics and industrial elements.

Content: “Dying Density” reveals a strange and mysterious sound universe, which quickly reminds me of one of the main sources of inspiration from Distortion Of Events. I’m referring to the cold and minimal universe of Sleep Chamber. I more than once got the impression that John Zewizz was operating behind this sound.

There’s an interesting twist between cold and somewhat sterile electronic arrangements and heavier, blasting industrial elements. Some of the vocals might remind me of the style of Clock DVA, which appears to be another source of inspiration for Michael Lubert. I also noticed a few and cool 80s elements reminding me of the minimalism of Crash Course In Science. But first of all Distortion Of Events is a band with a very unique sound and a great, but disturbing atmosphere.

↑↑↑: I like the coldness and especially the somewhat anguishing and austere atmosphere supporting the songs.

↓↓↓ : I think that the mastering could have been better. Some passages are extremely buzzing, which might be intentional, but not entirely convincing.

Conclusion: There’s an interesting evolution in sound on this work, which remains a truly fascinating platform of icy, tormenting electronics. This is the new Sleep Chamber!

Since you’re here … … we have a small favour to ask. More people are reading Side-Line Magazine than ever but advertising revenues across the media are falling fast. And unlike many news organisations, we haven’t put up a paywall – we want to keep our journalism as open as we can. So you can see why we need to ask for your help. Side-Line’s independent journalism takes a lot of time, money and hard work to produce. But we do it because we want to push the artists we like and who are equally fighting to survive. If everyone who reads our reporting, who likes it, helps fund it, our future would be much more secure. For as little as 5 US$, you can support Side-Line Magazine – and it only takes a minute. Thank you. The donations are safely powered by Paypal.
Tags: Distortion Of Events