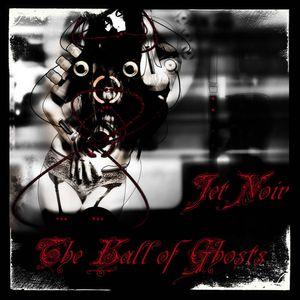 Content: Jet Noir is a female artist who you maybe know from her involvement as the keyboardist and backing vocalist in Naked Lunch. This new and self-released EP features 4 new songs plus 5 remixes.

The opening cut “Thy Dagger” is an interesting piece of music mixing heavy guitar riffs and breakbeat passages adding some extra power to the song. But the most surprising and exciting element is the rather unexpected electro final revealing irresistible sound treatments. The song this way became a melting pot of different ideas, but in the end I would say that it works. Jet Noir still has a powerful timbre of voice, which has been produced in a rather clear way.

Jet Noir got the help of a few guest artists to achieve this EP. Dean Baker is not exactly the most familiar name in the electro scene, but he’s the keyboardist of the metal-driven formation Galahad. He’s one of the contributors to this EP while he also did the production. That’s maybe one of the reasons why this album covers some explicit metal influences.

The 3 songs left remain under the level of the debut song. You’ll here discover a sound moving in between pure epic arrangements and a more explicit metal inspiration. One of the main fascinating elements are the excellent vocals by Jet Noir. I sincerely expected a bit more out of these 3 songs.

The remixes reveal a clearly electro-driven style by bands like Attrition (Martin Bowes still did the mastering of the EP), Ruinizer and Technomancer. Dean Baker did a remix as well while Jeremiah Saint is a rather unknown name.

“Thy Dagger” was seriously empowered by electronics treatments thanks to Technomancer, but the best remixes are coming next. Ruinizer has remixed “A Cold Day In Hell” in its usual complex approach while holding on the epic touch of the original song.

Attrition did a real cool job remixing “A Cold Day In Hell” as well. There’s a mysterious flow running through this song, which is absolutely great and creative. I was a little less convinced by both last remixes.

Conclusion: “The Hall Of Ghosts” features one excellent and original song plus a few cool remixes. This artist clearly tries to bring something new although I’m not totally convinced. It would be interesting to hear the songs produced a more electro-minded style while holding on to the metal influence.