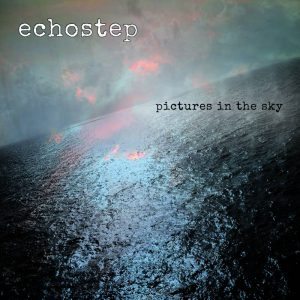 Background/Info: Echostep has been introduced as ‘the alternative music adventure of Cleveland, Ohio based songwriter James Patrick Young’. I never heard of this band before, which unleashed this self-released EP featuring 4 songs plus 2 remixes of the title track.

Content: The title song deals with electro-pop music. The slow cadence matches with the somewhat whispering way of singing and cold, melancholic-like melody line. The other songs left confirm the dark and somewhat fragile-like electro sound. You’ll hear some piano arrangements and cool female backings on one of the tracks.

The remixes of “Pictures In The Sky” was accomplished by Interface and Coldlink.

+ + + : The title song is not setting the world of electro-pop on fire, but it’s a song with a cool melody line. I also like the global atmosphere hanging over this song. Among the other cuts left there’s the noticeable “Just The Same”, which is quite comparable in style and approach to “Pictures In The Sky”. Among the remixes I especially like the more clubby-minded one from Interface, but Coldlink is a nice addition as well.

– – – : The softer cuts from the EP aren’t my favorite ones. It’s a different approach and missing some passion. Both songs are a bit soundtrack-like, but less convincing.

Conclusion: This EP reveals a fresh title song and cool remixes, but I think we’ll have to wait for more work from Echostep to get a real idea about the band’s potential.