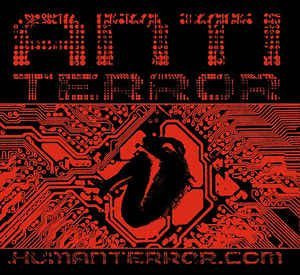 Content: The very first sequences and passages from “Humanterror.com” bring us directly to the dark and powerful sound universe of EBM. The dark side of the work has been accentuated by spooky-like vocals featuring female backings. Anti-Terror composes a sonic bridge between EBM and dark-electronics while there also is a mix between vintage electronics and more contemporary influences.

There’s a dark ambiance hanging over the work, which only reinforces the spooky side this band is dealing with.

+ + + : This is a noticeable debut, which I’m sure will please old-school EBM fans and more contemporary music lovers as well. I like the vintage flavor supporting this album with astral sounds and numerous sweeps. There also is an intriguing, ghost-like atmosphere, which is perfectly matching with the way of singing. There are several noticeable songs on this work.

– – – : Globally speaking “Humanterror.com” is a promising work featuring many attention grabbers, but unfortunately not a real potential hit. That’s what this album is missing to bring the band really into the spotlights.

Conclusion: Anti-Terror is an interesting new-coming band, which has accomplished a rather successful debut album. No doubt about it, this work will appeal EBM lovers and it’s a band to keep an eye on.