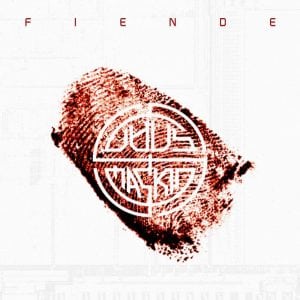 Background/Info: “Fullstendig Brennt” is the debut-album released last year by Norwegian duo Dødsmaskin. I was deeply impressed by this obscure noise-ambient piece of music, which became one of my favorite underground released from 2017. This new opus entitled “Fiende” has been released on Cyclic Law and brings us five new cuts.

Content: “Fiende” is not exactly similar to “Fullstendig Brennt”, but you rapidly will recognize similar sound ingredients. There’s a similar fascination about how manipulating sounds and creating noises, which has been mixed with pure industrial sound treatments and still a flavor of ritual music. The work moves from haunting atmospheres in heavy industrial outbursts. The three last cuts are absolutely genius!

+ + + : I think it always is a bit of challenge composing a new album after a masterpiece. I still have a little preference for “Fullstendig Brennt”, but this work reveals a similar quality. The ritual touch running through “Blod Fra Helvete” is a great and noticeable aspect I discovered. But I can also talk about the furious industrial blasts ending in a boiling noise-mould at “Poszthum”. This work sounds hard and rough, mixing impressive industrial sounds and rhythms together with ritual passages and constant noise treatments.

– – – : The noise parts are sometimes maybe too explicit, but still accessible. It’s a part of their creation, but not necessarily my favorite aspect of the work. So I hope they’ll not lose their creative mind into a noise abyss.

Conclusion: I can simply confirm that Dødsmaskin is one of the most talented and creative projects I’ve heard at the wider fields of industrial music for quite a long time. This duo has something different and definitely exciting!