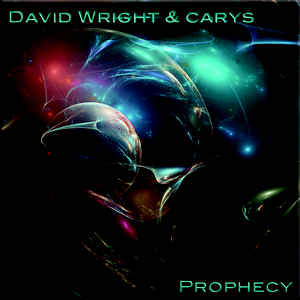 Background/Info: David Wright was one of the AD Music founders and is the first artist who released productions on the label. David Wright can now look back at an impressive discography and still gets the inspiration to explore further sound paths. A few years ago he got in touch with Carys who joined him on stage during live performances. Both artists now have accomplished this “ Prophecy”-album.

Content: The music of David Wright is pure synthesizer music rapidly reminding me of some of the most famous pioneers in the genre. This is the kind of artist appealing for fans of Jean-Michel Jarre, but simply to all lovers of early electronic music. Ou get the feeling to be transported among the stars. “ Prophecy” has a transcendental feeling, which is only accentuated by the sensual and angelic vocals of Carys.

+ + + : “Prophecy” is a beautiful work, the kind of release an artist can be proud of. But it also is the music David Wright is now dealing with since the nineties. He however still finds the inspiration to move on exploring new paths. I personally like the kind of contrast between his music and violin-like sounds. It sounds a bit like a sonic clash between space-music and neo-classic music, but in the end it sounds cohesive and deeply artistic. The analogue sound treatments always have this particular kind of magic, which is reinforced by the beautiful vocals of Carys. The production reflects a high degree of knowledge and comes close to perfection.

– – – : There are many great artists in the genre of David Wright, but there’s only one Jean-Michel Jarre. I don’t want to make too much of a comparison, but this is the kind of album that rapidly evokes such a legendary artist.

Conclusion: This is pure vintage electro-space music accomplished with a masterly production process and resulting in a stunning piece of music.