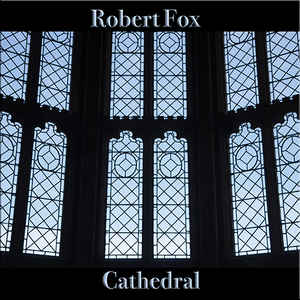 Background/Info: British composer Robert Fox is a veteran in electronic-ambient music. “Cathedral” is a soundtrack composition, which was written for a theatre play “Murder In The Cathedral”.

Content: This work features 2 long-duration cuts, which quite instantly move into a sacred and church-like atmosphere accentuated by Gregorian chants. There’re more of these chants running through the work. The music is definitely into soundtrack style and accomplished with evasive passages, which can become progressively darker. Each track sounds like featuring multiple chapters creating a dense and electro-ambient entity.

+ + + : You can feel the ‘volume’ of a cathedral running through the work. It’s an overwhelming sensation, which you instantly feel when entering into a church and which has been transposed in a genius way into this work. The soundtrack style is absolutely accomplished while accentuated by good-old Gregorian chants injecting a touch of mystery into the music. I like some of the darker and somewhat industrial-like passages.

– – – : The main point with this kind of record is that it has been made for a visual play while you here only get the sound. The work however has a strong visual appeal, but it’s never the same as assisting to the real play.

Conclusion: The theme of this soundtrack has served as perfect inspiration to create a rather ‘classical’, but fully accomplished soundtrack.