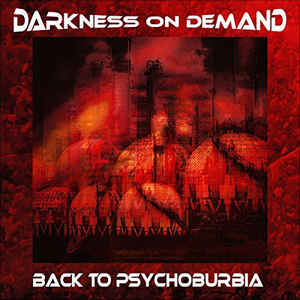 Background/Info: Known and adulated in a former life as Dance Or Die, the German trio resurrected as Darkness On Demand. After an interesting debut full length “Post Stone Age Technology” the band strikes back with a second EP taken from the album. The title song of course is a wink to an early Dance Or Die major song (cf. “Psychoburbia”).

Content: The title song wasn’t my favorite from the album although it’s filled with great nostalgia. It however is a dark, melodic and alluring EBM-driven song. Next to the “Album Version”, this EP reveals remixes by Eisfabrik, Agonoize and DoD (which stands for Dance Or Die and Darkness On Demand).

+ + + : You can’t expect much more from an EP; a cool title song, interesting remixes and especially the one made by Eisfabrik. But you’ll also discover two new cuts. “Quicksand” is a nice surprise. Darkness On Demand moves on there where Dance Or Die stopped so in the end it’s all a bit the same band. The fans will be ravished.

– – – : I still don’t consider “Back To Psychoburbia” as the best song from the album, but it for sure remains an important song (also because of the link with Dance Or Die). The new track “Never Too Late” is just a B-side track without real consistence.

Conclusion: Dance Or Die is still hiding behind this new band name so the fans will be not disappointed discovering that this legendary formation is still alive and kicking.