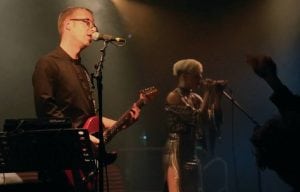 As a journalist I think it’s not my goal to only speak about ‘famous’ and/or ‘established’ artists, but still to make you discover new talents. Egoprisme is a French solo-project set up and driven by Jean-Marc Le Droff. The debut album “Among Noise” released on the French label Manic Depression Records revealed a great mix of cold, vintage electronics and typical dark-wave guitar parts. Egoprisme is not innovating, but simply getting us back to the thrilling period of the 80s. It’s a great sonic trip, which got me curious to know a bit more about this project.

Q: Can you briefly introduce yourself and give us some background information about your music ‘career’ which finally lead to Egoprisme?

JM: I am a 39 years old French musician based in Brest, France. I have a classical music background, then I moved to Rock and Electronic music. Egoprisme is a recent solo-project, and the result of various musical experiments and collaborations. It started in my home studio three years ago. Since then, I’ve been performing in many clubs in France and more recently in Berlin and Warsaw. I released two EP’s in 2015 and 2016 on Beko Disques, a French label based in Brest. My third EP, “Once You Get There”, was released in 2017 on TONN Recordings, an independent label based in Belfast, Ireland. Last January, I released a 15 tracks album, “Among Noise”, on Manic Depression Records, an independent label based in Paris.

Q: What means Egoprisme to you and what kind of music/sound did you want to compose?

JM: The word Egoprisme is a reminder that you’re always influenced by your own background, which often leads to false appreciations of situations. According to me, it’s a synth-wave project, rather club-oriented, and merging a post-punk guitar, cold-wave electronic sounds and lyrics in French and English.

Q: The influences running through “Among Noise” clearly sound pretty 80s inspired. Tell us a bit more about the inspiration, writing and global production of this work?

JM: I grew up in the early 80’s, so I guess I’ve been highly influenced by the emergence of midi-synths that were used at this time. The inspiration came out of artists like John Maus, the KVB, Boy Harsher, Lebanon Hanover, but also Prince, David Bowie or Depeche Mode. Inspiration also came from collaborations, like the one we have with Mode in Gliany in our side project called Premier Mouvement, or with the performer Rula El Bahr. The composition has been quite a long process that oscillated between home studio and stage, as I like to test new songs on stage before working on them back in studio. I produced this album mostly alone in my home studio, but always submitted new songs to a short panel of friends, among whom Christophe Galès which helped me with the mixing and did the mastering.

Q: Egoprisme is a solo-project although you got some help from a few guest artists to achieve the album. What are the main advantages and disadvantages to compose songs on your own and how do you transpose a solo-project on stage?

JM: I like to be autonomous in the various processes of composition, but I also feel the need of working with other artists, to confront ways of working and find new directions. It’s not a problem for me to be alone on stage, as I always plan the way I’m gone play a new song on stage while I compose new tracks. But it’s also always fun to have guests on stage when possible, even if it’s often more difficult to achieve in terms of logistics…

Q: I noticed some discrepancy between your music which is pretty ‘retro/80s’ like and the cover/artwork of the album, which is more styled and into ‘modernism’. Tell us a bit more the artwork and its importance?

JM: The artwork has been made by a friend of mine called Baptiste Stephan. I like the way he graphically interpreted my universe without using the general codes of cold-wave or dark-wave. I like the elegance of his work on this album, which reminds me of Bauhaus and looks timeless to me.

Q: We all know it’s pretty hard for ‘new’ artists/bands to catch the attention of a wider audience. Are you aware of this aspect and how do you manage it plus what do you expect from “Among Noise” for the further development of your career?

JM: Indeed, it’s pretty hard to catch attention, but it is definitely not my first goal. I’m a rather discreet person, and don’t like excessive promotion. My music is spread around so sometimes people who like it are spreading it again so in the end you can catch a wider audience.. My goal isn’t to become famous, but to share feelings through music, to have fun, to meet fantastic people and to travel thanks to my music. I see “Among Noise” as good way move forward in this approach, and Manic Depression Records helped me a lot in making my work visible to a wider audience.