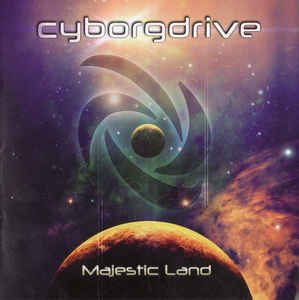 Background/Info: Spanish musician Paco Butrón aka Cyborgdrive started composing music in the 90s. He got involved in several bands and released numerous albums. “Majestic Land” is a kind of introduction to the electro universe of this artist who has been inspired by legendary synthesizer artists like Jean-Michel Jarre, Tangerine Dream, Klaus Schulze ao.

Content: One of the album’s main particularities are the guest singers. Next to several instrumental versions, “Majestic Land” also features several songs with vocals.

The sound remains strongly inspired by electro-pop music. It’s pretty vintage like and rather evasive. But don’t expect to discover space-like synthesizer music because “Majestic Land” has a solid dance appeal although mixed with some evasive passages.

+ + + : If you like synthesizer music and especially pop-minded songs you’ll for sure going to like “Majestic Land”. There’s a cool old-school feeling running through the work while some excellent danceable cuts are simply irresistible. “Freedom Tonight” is a damn good efficient song, which even reminds me a bit of Madonna. One of the most noticeable instrumentals is “Dancequence”. And if you’re into real vintage electronics I’ll recommend songs like “Return To Sky” and “A Place In Time”.

– – – : What Cyborgdrive mainly needs is a real band singer! Guest singers are cool and add some diversity to the work, but a few instrumental cuts remain a little less unaccomplished because of the lack of vocals.

Conclusion: I’m not entirely convinced by Cyborgdrive, but there are a few brilliant songs featured on this album. Good electro-pop music definitely needs a talented vocalist while guest singers are okay, but more like a surrogate!