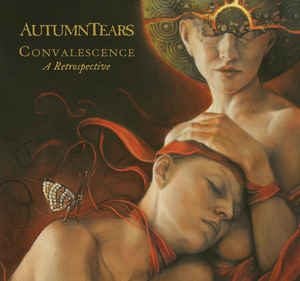 Background/Info: American formation Autumn Tears released 5 albums in between 1996 and 2007. All the albums were released on Dark Symphonies (USA). They next went into hibernation till this year and the release of the EP “The Origin Of Sleep”. “Convalescence: A Retrospective” bring us back to the 5 studio albums featuring a kind of ‘best’ of plus 3 unreleased cuts.

The songs are made of dark reverie and a symphonic touch. The orchestral arrangements bring some drama to the composition. Autumn Tears also features graceful, fragile and sensitive female vocals. Due to changes in the line-up several singers have been involved with this band.

+ + + : This retrospective is made of extremely dark-, dramatic- and beautiful compositions. There’s a sweet fusion between electronics and acoustic instruments. The music reveals a symbiosis between refinement and heavier, orchestral elements. It’s a sweet and melancholic caress with heavenly female voices on top. Next to the fine selection of familiar cuts the work also features 3 previously unreleased songs, which are in the same vein of the tracklist.

– – – : This kind of compilation is a truly bless for music lovers so I don’t have real minus points although the unreleased songs aren’t exactly the most convincing ones, but just a little bonus gift for the fans.

Conclusion: Autumn Tears makes me think to an ‘ethereal requiem’. There’s a delicious contrast between the deeply sad spirit emerging from the songs and the artistic beauty of the composition.