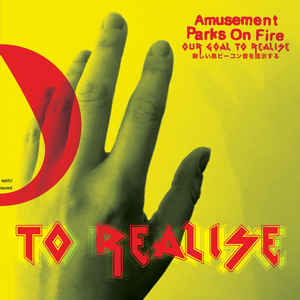 Background/Info: There has been a lot to do around British formation Amusement Parks On Fire. Set up in 2004 the band gained an instant recognition leading them to play together with famous bands. After several releases this single is the first ‘new’ work since 2010.

Content: Two songs aren’t that much to get an idea about the ‘new’ Amusement Parks On Fire, but one thing is for sure, it remains pretty shoegaze like. The title song is the hardest one while the B-side is more dreamy although still pretty dark.

+ + + : If you’re into fuzzy guitar and a kind of imaginary foggy sound atmosphere you’re for sure into shoegaze so this single will ravish your expectations and needs. It’s a rather classical release in the genre featuring a cool title track. I also fully enjoyed the sexy vocals of Michael Feerick.

– – – : Singles are becoming rather unusual today. It’s not the best way to get a global perception about upcoming work although it clearly gives you an idea. I’m waiting for more!

Conclusion: This single features all required ingredients to make cool shoegaze music. It also stands for a nice comeback of Amusement Parks On Fire!

Best songs: “Our Goal To Realise”.

Since you’re here … … we have a small favour to ask. More people are reading Side-Line Magazine than ever but advertising revenues across the media are falling fast. And unlike many news organisations, we haven’t put up a paywall – we want to keep our journalism as open as we can. So you can see why we need to ask for your help. Side-Line’s independent journalism takes a lot of time, money and hard work to produce. But we do it because we want to push the artists we like and who are equally fighting to survive. If everyone who reads our reporting, who likes it, helps fund it, our future would be much more secure. For as little as 5 US$, you can support Side-Line Magazine – and it only takes a minute. Thank you. The donations are safely powered by Paypal.
Tags: Amusement Parks On Fire, shoegaze