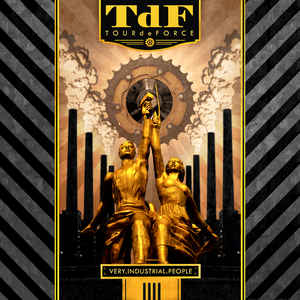 Background/Info: Italian artist Michael Ryder is already active under the TourdeForce moniker since 2004. A few albums saw the daylight, but “Very Industrial People” is the first new full length album in four years.

Content: The sound and influences running through this album can be considered as ‘classical’ electro-pop elements with some extra electro-wave ideas on top. It’s a somewhat sweet band easy listening with retro (80s) influences, but still revealing a few club-driven songs. Several guest (backing) singers have been asked to achieve several songs. The album is diversified and still features a few little surprises like the chorus of “Fight For Your Right”, which clearly is a wink to the legendary hit of the Beastie Boys.

+ + + : Speaking for myself I became more under the influence of the ‘harder’ cuts. They’re just more club-orientated and I especially want to mention “Innocence Of The Beast” as absolute highlight. It’s a danceable and melodic song. Another attention grabber is “Panic”, which is quite danceable as well, but still featuring a cool electro-wave touch plus excellent female vocals by Jenna Christensen. “Office Punk” is another noticeable track for its EBM elements. Another track I want to mention is “Dresden” for the great and poignant lyrics. TourdeForce is not what I would call a band with a message, but the lyrics have a real deeper signification. “Very Industrial People” is an album that will please to synth-lovers. I also have to say a word about the great and epic-like artwork of the front cover.

– – – : This album features 16 songs, which is an element I highly appreciate. There are a few cool songs although I’m missing more highlights.

Conclusion: “Very Industrial People” is a globally sweet and entertaining electro-pop work, but which is maybe missing that little extra to speak about a fully successful work. I think this band can do better.