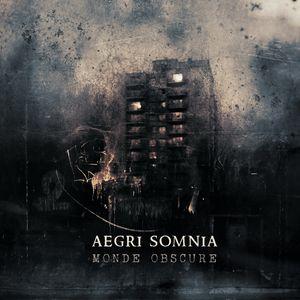 Content: After having released 2 digital albums we here welcome the first official CD by Aegri Somnia. The name of the project sounds pretty tormented and that’s what the music reflects as well.

Aegri Somnia is a Croatian solo-project set up by Jurica Santek. You directly feel like you are entering the darkest dungeons of unknown horror places. “Monde Obscur” indeed is a pretty obscure and desolated sonic opus that will immediately appeal for visual transformations. The main particularity of the work is the impressive arsenal of sounds and noises that have been used. Santek clearly appears to be a passionate sound collector who likes to accomplish his work by a solid implant of field recordings.

The majority of the field recordings are aquatic-like, but you also will recognize some more unexpected and funny passages like the typical sound of a ping-pong game. Aegri Somnia is quite different from this dark-ambient sound formula, which is mainly based on dark-electronic passages. This work is more creative and experimental as well. You sometimes feel like you are being imprisoned in a sonic hive. The multiple and detailed noises create a constant gloomy feeling, which sometimes gets powered by humming sound waves. Monstrous sound blasts are now and then emerging to reinforce the state of terror the listener has been exposed to.

“Monde Obscur” is filled with endless sound manipulations and diverse noises. It’s an imaginary sound labyrinth where the visitor is surrounded by dense atmospheres, but there are a few surprising and more ‘human’ passages like the somewhat bizarre piano part running through “Les Temps Ont Changé”. I also was intrigued by the kind of monk chants at the beginning of “Noir Et Blanc”. The visual strength of “Monde Obscur” will rapidly harm your psyche, but in the end that’s precisely what we expect from dark-ambient music.

Conclusion: In a lapse of more or less 3 years Cryo Chamber became one of the most visionary labels of dark-ambient music and Aegri Somnia is just one of those upcoming projects belonging to the future generation of the genre.