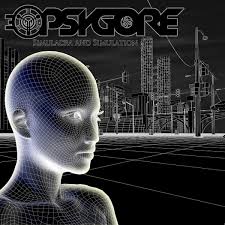 Content: Based in Ontario (Canada) we welcome the 2nd release by Psygore. This album features 7 songs plus 4 remixes.

The work takes off with a rather explicit dark-electro approach, which has been empowered by heavy (sampled) guitar-like passages and driven by harsh, commanding vocals. “Rev0lution” coming up next is a smasher, which might remind you of the early work of Noisuf-X. This is a terrific outburst of electro-industrial music. And the pleasure goes on by “Transcend The Flesh”, which is driven by a solid EBM-inspired bass-line. The structure is somewhat repetitive, but it doesn’t really matter as this is another cool song.

“Nihilistic Technofetishist” is a rather complex title for a furious and enraged piece of power-electronics in the darkest vein. Psygore clearly is a merciless sonic terrorist, which excels in the composition of heavy compositions. “Quantum State Of Singularity” is a real smasher accomplished by some vague epic parts and here again you’ll hear some guitar-like passages injecting an extra boost of adrenaline to the work. The last piece is a new instrumental one, which already reveals a solid dose of power and bombastic percussion parts.

The remixes have been accomplished by Dr. Kranck, Cryptic Dawn and two remixes by Flammpunkt. The remixes are pretty cool, but not exactly adding a real bonus to the work. I however recommend the excellent remix of “Nihilistic Fetishist” by Cryptic Dawn.

Conclusion: Psygore is an interesting band active at the wider fields of dark-electronics. I think that some final arrangements can be improved, but globally speaking this is a successful opus and a band we better can keep an eye on!