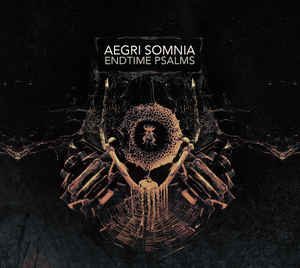 Background/Info: Croatian solo-project Aegri Somnia is back on track unleashing its third album in history, which also is the second one released on Cryo Chamber.

+ + + : Aegri Somnia reveals an interesting progression in global sound production. I especially like the slow progression resulting in an amazing final cut. This is dark-ambient with a strong visual appeal while accomplished with great sound sculptures. There’s an accomplished merge between subtle little noises and other overwhelming electronic atmospheres. It’s really fascinating to see how a few extra noises can transpose a track into a poignant apotheosis.

– – – : The tracks are somewhat similar-like so in the end you get the feeling of listening to a long-duration single piece without that much diversity. The album sounds more soundscape-minded, which is not a problem at all, but a little variation would have been a real bonus.

Conclusion: “Endtime Psalms” is a fully enjoyable production in the dark-ambient genre. It reveals a few outstanding cuts, but on the other side it doesn’t really innovate.

Since you’re here … … we have a small favour to ask. More people are reading Side-Line Magazine than ever but advertising revenues across the media are falling fast. And unlike many news organisations, we haven’t put up a paywall – we want to keep our journalism as open as we can. So you can see why we need to ask for your help. Side-Line’s independent journalism takes a lot of time, money and hard work to produce. But we do it because we want to push the artists we like and who are equally fighting to survive. If everyone who reads our reporting, who likes it, helps fund it, our future would be much more secure. For as little as 5 US$, you can support Side-Line Magazine – and it only takes a minute. Thank you. The donations are safely powered by Paypal.
Tags: Aegri Somnia, Mayhem