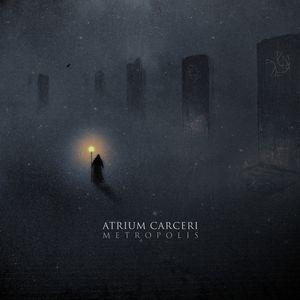 Content: Simon Heath has been very prolific during the past months. Earlier this year he released a soundtrack production (cf. “The Old City – Leviathan”) while he also got involved in several side-projects. Atrium Carceri already strikes back with a new studio album featuring 11 tracks filled with haunting atmospheres.

“Metropolis” invites the listener to join the darkest corners of our inner-self. The sonic expedition is meant as an illusion, but where imagination becomes pretty close to reality. A small bridge constructed by the emblematic sound atmospheres of Simon Heath separates both distant worlds. From the very first notes of this work you feel like you’ve awakened in an evil epicenter animated by spooky-like vocals.

But the universe of this “Metropolis” also reflects the cruel and desolate universe Atrium Carceri has conceived since its early beginning. “The Dark Mother” perfectly symbolizes this desolation with a subtle mix of piano-like play and sweeping- plus thunder-like sounds. Atrium Carceri also has a fascination for aquatic field recordings, which emerge on a regular basis inviting the listener to join a mystic abyssal world. “Across The Sea Of The Dead” is a genius composition in the genre on, which I especially like the somewhat exploding sounds and monstrous noise blasts.

Behind this dark creation reflecting the scariest feeling of human mind also hides a more evasive side, which comes through on cuts like “Black Needle” and “Decrepit City”. I like the wafting sensation emerging from both cuts although there always is a kind of evil sound in the background.

This obscurity comes through on a masterpiece like “Sacred Slab”, which is a pretty short, but totally haunting cut. Echoing sounds, deep and low sound treatments and spooky sweeps have been activated on “200 Days” while desolation comes to a climax on “The Cowled Seers”. The final track reminds me a bit of the cinematographic experience revealed on the previous album, but which always has been a part of Atrium Carceri. The humming blasts running through this track lead the visitor on a final ride through this magnificent inferno.

Conclusion: “Metropolis” is one more impressive work, which can be add to the list of masterpieces created by Simon Heath. This is a fully accomplished and diversified dark-ambient work.